We went to a shop called Nielanell’s in Hoswick. Two people called Neila and Minty worked there. Neila was the main person. She showed us what inspired her to make jumpers and shawls and that was animal print, like an elephants ear, crocodile skin effect, snake skin and fish scales. Neila put the crocodile print shawl on Melissa it was red and a grayish colour. Minty put on the elephants ear shawl. They were quite colourful. We saw all different kinds of sheep wool. Neila had a spinning wheel from New Zealand, the difference is that the New Zealand one can take in ribbon and beads to make really interesting wool. 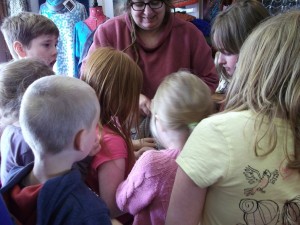