On Friday, I went down to the weaving shed. They were getting prepared for the carnival. Merrie Dancers were performing on stage and when they left, Brian Nicolson and Maggie Adamson entered the room. Maggie was in Burravoe for sailing, Brian had brought his guitar and Maggie brought her fiddle. Maggie is one of the best fiddlers in Scotland. They played away and then my dad went up to them and because I had my fiddle with me (I bet you know where this is going) he asked them if I could play with them. I played my main 5 tunes with them. 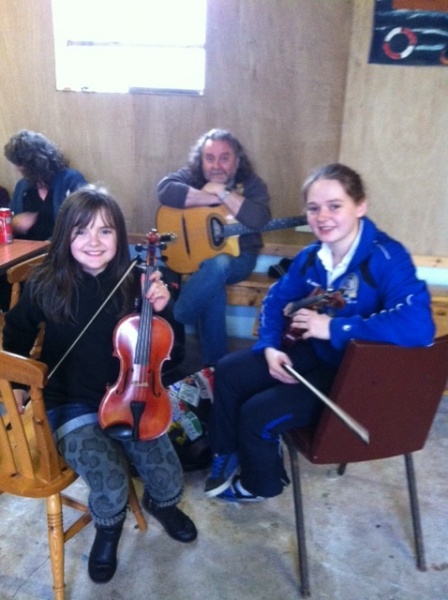 On Saturday, I had two events. In the morning I had to get up early and get dressed up because I was doing a Disney themed sponsored walk/run. It was towards Yorkhill Childrens Hospital. I was being Tinkerbell, Bradley was being Yoda, Mam was being Tigerlily and Sofia was being Perrywinkle. Sofia was doing 1km, Bradley was doing 5km and mam and I were doing 10km. I was very spagie the next day.

The SAME day I had the carnival. I was wearing a green dress so it was easy to turn into the float theme. The Burravoe bairns float was aliens and we came 1st, the Christmas float came 2nd and the Pirates of Yell Sound came 3rd. We got a prize of £100 for charity. We haven’t decided yet what we will put it towards. Ms Breyley and other helpers cooked a BBQ for everyone. There were Beef Burgers, Chicken Nuggets, Cheese burgers and hotdogs. We had a late night.