There is a really hot country and it has lots of people there. There is a princess called Suki, she is an important princess. She has a magical sari. She wears it everywhere! It gives amagic to anyone she likes. She wears a special nightgown that’s like a sari. She has a cat, she is called Suri.  She looks like a little leopard really, with spots and ginger and dark colours, she is rather big. They both are strolling to the town. “Look over there Suki it looks like a prince, he looks a little lost” said Suri. “I think you’re right” said Suki.  They are just walking over to him and they are saying “are you ok” and the prince is relieved that someone comes because he is really lost. They are all at Suki’s palace now and everyone is welcoming the prince. He is living in the palace. The princess and the prince are the richest people in the world. 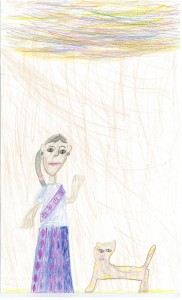