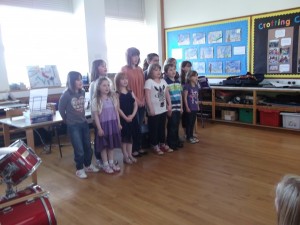 On Monday I had my last school concert at Burravoe since i am going into secondary after the holidays! We didn’t have a play or anything we just sang, played instruments, showed our work and presented power points!

On Monday afternoon at the school we re arranged the classroom so that there was rows of chairs and they were all facing the front so people could sit while we did our powerpoints! We also re arranged the middle room for when we were doing the musical bits! For the musical bits we sang The Trowie song, Zip-a-dee-do-da and Three blind mice and frere jacques as a round! We practiced all the musical bits including the instrumental bits! We had enough of practising and saved our voices for the real thing!

At night we came to school at 18:20 because it started at 18:30 and we wanted to be prepared! At half six we started off with the musical bits. Lucy played her Fiddle and she did good! Mia played the piano and everyone enjoyed it! Charlotte played Bad Romance by Lady Gaga on her guitar! Lucy lastly played her accordion and everyone enjoyed that too! We sang the Trowie song next and Lucy accompaniedus on the piano! We did the rounds next in our square shape and did the actions and all and I think everyone was impressed! We sang and played Zip-a-dee-do-da last because its a happy cheery song! Everyone had tea and biscuits for a while in the middle till they came and sat ready for the powerpoints and trophy giving! We went in age order with our powerpoints, Mia’s powerpoint was about the Swan trip, Charlottes was about Quad Blogging and The P7s was either about what has happened while being in P7 or through out our primary years! Miss Breyley announced who won the cups and Lucy got the big cup for overall musician and Charlotte got Most Improved. Miss Breyley also handed out the certificates and the book tokens we get! I had a good last concert at Burravoe!