We held a concert to show it was the end of term. We performed songs and had  a PPT presentation. The songs we played were  Zip ah dee doo dah and Da Trowie Song and we did two different rounds at the same time in a kind of accordion way (two rows or pupils walked backwards and forwards towards each other). We did that then we went into the classroom for PPTs. I had one about me being P7. It had a few things we did in P7 like the Animation and After school club. There was a lot of parents and grand parents that came and we had tea and biscuits in the middle. We got certificates and mine said for being a good representer in the Advisory group. We got book tokens and mine had Wheres Wally I found Wally on it! We showed people our stuff on the walls then we went home. I had a cookie and milk at home. 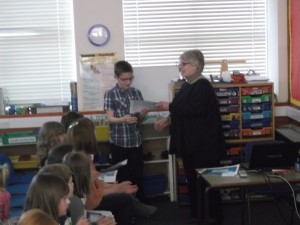