On Wednesday the P7s went to Mid Yell Junior High School for Transition. We took Miss Breyleys car because there are only 3 of us. We had to sign in at the desk in the visitors book. Lydia and Ming were also signing in at the same time so we all walked to the P7 room and sat down at the tables with our team.

Our first task was to think up some ideas for the opening ceremony for sports day. Mrs Johnson put on a timer of 5 Min’s and 14 seconds for us to write down our ideas. We each got given a number to have a task to do. I was number 3 so I was the scribe. After the timer stopped we sat and told the other groups our ideas then Mrs Lawson wrote them down on a big bit of paper for us to vote on later.  We all decided that we were going to walk around in a circle with our teams in the ceremony with the Scottish anthem playing behind us. The team leaders also had to wave the flag.

Our next task was to make a flag for us to wave on sports day. Our team decided that we were going to have the American flag but instead of the stars on the flag we would put a pineapple because our team is called The American Pineapples! We all got a large sheet of fabric and we decorated it. I started to cut out red strips for the red stripes on the flag.

We had piece which was different sorts of fruits! Megan showed me around the school, the bell rang so we headed back to the P7 room.

Mr Williamson came to talk to us about the final arrangements for sports day. We had originally planned for the sports day to be outside but it was such bad weather that it had made the pitch all muddy so we changed it to be in leisure centre. We also had to change some of the activities so that they could be inside.

We had a bit of time after he left to finish our flags. We had to stick on the pineapple and some more stripes then we were done!

We went for dinner which was either Pasta carbonara or stew. I had the pasta. Outside we played Kenny but we had to go in when the bell rang.

Inside the teachers split us up into 3 groups of 5 and had different tasks for us to do. Ms Boulay had a french game for us to play, Mrs Johnson had Jenga with different things written on them that we had to do (like 20 star jumps or say what our favourite song was, etc) and Mrs Coutts had scattagorys except it was the colour of the olympic rings. Our group went to Ms Boulay first. We played a game like snap except in french but all the others were so fast that I only got 1! At jenga there were 2 tiny towers so there wasn’t going to be a lot of around 1 tower. Me and Harry were at one tower and Jack, Lydia and Michael were at the other. Harry took out a brick that said we had to move the tower 1 metre away from where we first were and that took a bit of faffing about! At my last shot I (of course!) made the tower fall down! The last group was the scattogorys with Mrs Coutts. All the groups were having a competition to see who could get the most points. Our team got 23 and won! After that we left and went to the shop.

We were aloud to get a sweetie or an ice cream at the shop so I got a cornetto! We went back to the school and it was 20 minutes till home time so we did maths while eating ice cream! 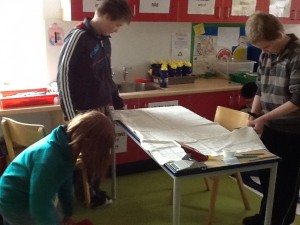