This Wednesday was transition in Mid Yell Junior High School. First we had to get to Mid Yell, Once we were there and in the school then we had to sign in. After we signed in then we went into the P6-P7 classroom, all of the P6’s had to go into a different class for the day so that we could do our transition stuff.

The first task was to plan an opening ceremony for Sports Day in 5 minutes and 14 seconds all of our groups came up with very different ideas. We all voted for different ideas and then jumbled them all up so we had a mixture of the ideas which we voted for. Then we had to make big flags in our different groups ( the groups are all different contrys). Me, Peter and Bryden’s group are called The Kyrgyz because our group is based on Kyrgyzstan. We had to make our flag out of a red sheet and yellow fabric, we attached our flag to bamboo sticks with cable-ties.

After we had finished our flags then we had to record an audio claip to put on our groups blogs.  We had to find information which we then had to record so that we could add it into our blog. Then we had to go for dinner I had a baked tottie with cheese on top and grated carrot. We got a bit longer on our blogs then we got to do different activities.

One of the other activities to do were French places and medals and the last activitie was jenga with forfits on every block so once you had removed a block then you had to do whatever it said you had to do. Once we had done all of the activities then the winners of the olympic rings sheet were announced  then we went to the Linxhouse shop. We got to get ice creams there but Brydon got a sweetie. Then we went home. 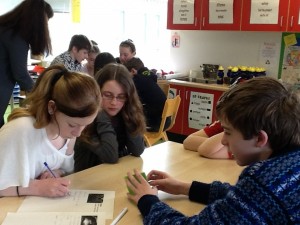