On Wednesday p3 and p4 went to Voxter were we learned about how to look after the earth. We got split into groups they were the red team,the green team and white team. Me and Leah were in a group together we were in the green group. Melissa and Mia were in the red team.  We played 2 games one game is were we got split in to 4 groups and had to collected as many litter bugs as we can. My team got 24 litter bug and  everybody else got more than 20. 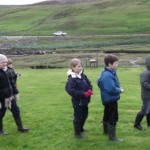 The other game where there were a beach, a town, a grass land and a forest and you are an animal. You have run as fast as you can and the person in the middle has to put their hands on their eyes and when everybody is ready they have to say a place and if your on it your out and you get rubbish on the place that they say but you can still go were the rubbish is putted.