On Thursday we went to Urafirth to see a play by Baldy Bane. It was in the school. The school was nice and it had shields around the top of the hall way and a 3d map of Urafirth. We walked a bit more and found a nursery waiting room thing and some toilets. After we had a tour of the school then we went outside to wait for Baldy Bane. Outside the children had painted pictures that represented them, 2 people had done Pokémon, animals, themselves and colourful shapes. We played on the playground and went to the beach and found bird eggs. We saw them inside and went there. We took our jackets off and went and sat down in the sports hall. The play started, it was about road safety and it was had 4 friends playing in an old railway station. After the play everyone went to the door and went outside to play. Their play equipment has 2 play houses, slide, rocky motorbike, a giant climby thing and some logs that are on chains and roll over. We played 3 step catchy, it is a game your only aloud 3 steps on the ground or else you are it. The best tactic is climb up the big thing and stay there until the catcher comes up. At the end we left and went to Eshaness café for food. 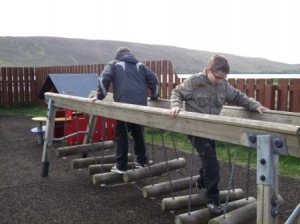