On Wednesday we went to the Shetland Museum to see the Lewis Chessmen that were found on a beach on Lewis. When we got there Brydon and I had a game of chess on a big chess board. 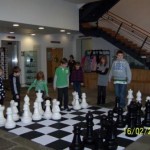 When we finished, Yvonne the Museum Education Officer and Lucy the Historian came to show us the Lewis Chessmen. My favourite one was the Berserker Warder that was biting his shield but they didn’t have him, but they did have a picture of him. I found out that the Berserkers took drugs before the battle to give them courage and to scare the enemy. I learned that they were about 1000 years old. I found out that they were made out of walrus tusks and repairs made out of whales tooth. We got to draw our favourite one, mine was the Berserker.  We got split up in two groups, I was in the big ones group. Lucy asked us some questions and recorded the answers and then we got to make a model of one of the Chessmen. 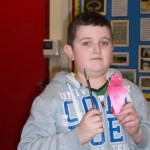