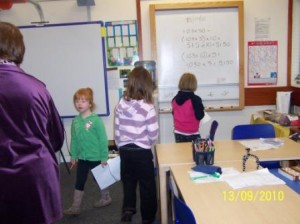 On Monday I did show and tell. My show and tell was about EYE SIGHT! I told everyone about what protects are eyes like the Eyebrows protect our eyes from sweat rolling in them. After I told everyone about our eyes they did a TREASURE HUNT! I made them a treasure hunt to do with vision. I took ten items from my house to see if they had noticed anything different just in the morning. It took a lot of time planning it but it was worth seeing everyone so exited and happy. I had to to stay behind on Friday to get everything ready and it was very hard trying not to tell anybody. Everybody had to record their finds by writing it down on a piece of paper so I could choose a winner.