We have a had a fabulous couple of days crafting with Hannah.  She told us all about her career in the props making industry, what she studied at art school and university, and about some of the things she has made for film an television.  We then took part in a Christmas craft extravaganza!!  Check out the picture of our fantastic wreaths…pompom and messtastic. 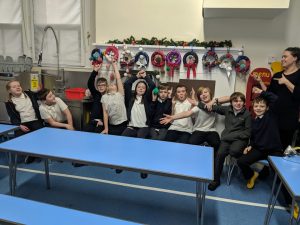 What the pupils said:

I loved coming to see what it’s like being in P67 these days.  I loved telling you all about my job and think your wreaths are beautiful.  They are all so different and individual.