In Term 3 the club will be on every Thursday lunchtime. Ms Newlove will coach the school netball teams.

Our netball team have had an amazing season. Our P6-P7 pupils trained every Monday from 3-4pm with coach Stephanie from Active Schools.

For the first time since having a netball club we were able to enter two teams into the Johnstone Netball league. The teams competed down at the Johnstone Hub from 4pm-6pm.

After the first three evenings we were sitting in the top four of the league and were awarded a place in the Renfrewshire Netball finals day held at the Paisley Lagoon. A team of ten were selected to compete in the Finals Day.  After playing in a few tough group matches we managed to raise our game and finish second in the medal play off group. Well done to all our players!

On the final league night our team battled with St David’s for the league victory and lost by one goal. Both teams placed extremely well. Team B finished 4th and Team A finished in second place. We are extremely proud of both teams. 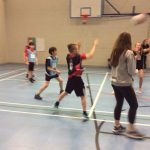 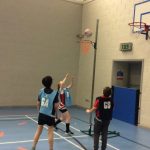 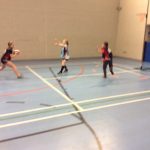