The chicks have hatched.

They hatched last week in 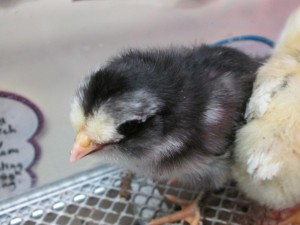 fact, and are now running around the warm, cosy brooder at high speed, not a care in the world. Fourteen of them survived and are in the brooder rushing about. Number 17 hatched first and is massive, running around, knocking over the other chicks. Most of them are black, that means they are black rock chicks, originating in Scotland, and four of them are white that means they are la bresse gauloise chicks, originating in France. The chicks are now growing feathers on their wings and tails and are now trying to fly around the brooder. Some of the chicks are standing up straight and are a little bit more aggressive. We think these are cockerels. We need to weigh them to check they are well and putting on weight. Remember to put gloves and lab coats on! Otherwise we could pass germs on to the chicks, causing them to get diseases. We have to gingerly place them on the scales making sure they don’t make a bid for freedom and fly round the school. Most of the chicks are around 50-55grams. There is a weak chick, number 14, that we need to keep an eye on. We needed to come up with a way of remembering who was on what job, so we made a rota! The jobs are feeding them, giving them fresh water, cleaning out the poo, data recorder, and weighing them. The P5-7s have been working with Patrick and he has been teaching us about the chicks. We have made a hypothesis that the white chicks will grow faster because they are bred for meat and the black ones are bred for eggs. But Patrick says that with a hypothesis you need a null hypothesis as well to disprove your hypothesis. A null hypothesis is basically you flip your hypothesis round so our null hypothesis is that there is no difference between the chicks, so we need to prove it wrong, and so far according to the chart our hypothesis is right!  The chicks are amazing creatures and I’m happy we got them in the classroom.

A place for pupils to share their learning with the wider world. We'd love to hear your comments.