We have been learning about road safety.

I can now do an emergency stop and can do basic manoeuvres through obstacles.

I can also overtake a parked vehicle and can pass a side road safely.

I can take these skills and ride my bike safely.

On Thursdays now for the last two weeks, we are having science teachers from Inverclyde Academy coming to teach us science.  The first week we did a bit of physics and last Thursday  we did some chemistry.  When we were doing chemistry we had to make our own fizzy drink and we got to make our own sherbet. We made the fizzy drink with some types of sugars and for the sherbet we used flour and types of sugar as well.   By Dean Kane.

Last Thursday Mrs McKenzie came from Inverclyde Academy to teach us chemistry. She showed us how to  create Irn Bru and Coke  without flavouring so it tasted saltier than seaweed. We also made Sherbet with Citric Acid, Icing Sugar and Baking Soda. We used this recipe to create the fizzy water as well. The 19th of November was the first day they came. We had to make paper windmills and test whose generated the  most energy. It wasn’t as fun as making the sherbet though.    By Jason Smith

For the past two Thursdays the Science Teachers from Inverclyde have came to our school to show us all different types of science including physics and chemistry. During the first week we made wind turbines and Kai’s turbine produced the most with 13 volts. On the second week we made sherbet and a fizzy drink without the flavouring. We also made a rocket using a film canister and      vitamin C tablets and overall everyone thought it was amazing.  By David Abernethy

On Thursday we had a teacher in from Inverclyde Academy called Miss Mackenzie who taught science. In science we got to try fizzy drinks without the flavourings. Everyone thought it was disgusting… (it was.) After we tried the fizzy drinks we added two teaspoons of icing sugar to the ingredients we used to make the fizzy drinks to make sherbet. This lesson was called chemical reactions.  By Chloe Kerr

Mrs McGowan’s primary sevens have been doing circuits in p.e . We have done shuttle runs, burpies, star jumps, squats and push ups/sit-ups. We had to record our scores. It wasn’t the first time we had done this, some of us did it last year. It was kind of fun and confusing because you had to add up the scores after it. After each session we were sweating!

By John and Steven 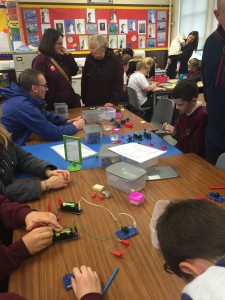 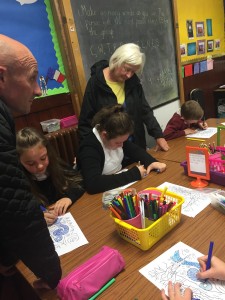 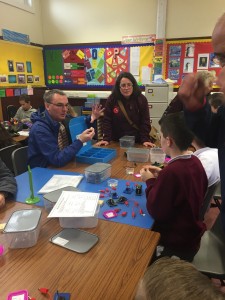 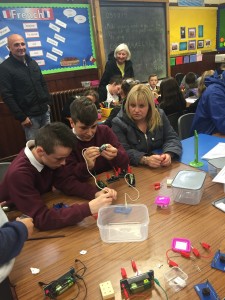 On Monday the 5th of October,  our p7 class had some parents come in and watch us work. There were four groups to show parents what we had been learning in term one.  They were art, science, active spelling and maths. It was really warm because the classroom was crowded with all the pupils and parents. At art we coloured  in the starry night by Vincent van Gogh. At science we showed the parents how to make a series circuit and a parallel circuit. Then at active spelling we done our spelling words in all different designs.  At maths we showed our mums and dads how to break down long sums. Soon after it was time to go.

By Carla and Kerin

On a Wednesday we have an activity’s afternoon which is where P5-P7 go to either Arts & Crafts, MUGA, Lego, Film Club or Health & Wellbeing. It is from 2pm-3pm instead of Golden Time which P1-P4 still do. I used to be in MUGA where we played basketball for 4 weeks and in basketball we played mini  games of basketball. We worked on our passing skills by playing where we picked a partner and we got told to pick who was number 1 and who was number 2.  The number 1’s ran around the MUGA pitch while number 2’s  tried to tackle all the number 1’s.

For the last two weeks we played football where we got split into two teams and the teacher gave numbers in our teams. Then the teacher called 3 numbers and if your number got picked you would play against whoever had the same numbers in the other team. I really enjoyed it. 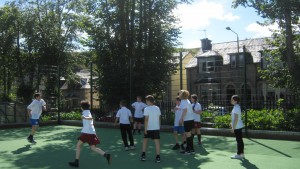 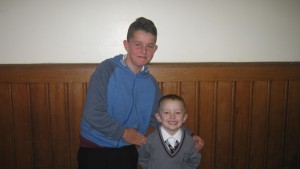 On Friday all of P7 went to P1 to buddy.

When we arrived we sat down and listened to P1 sing songs.  They were amazing!  Some people said the P1s  were better than them.

After that we sat and read  story’s to them.

My buddy was called Alfie, he was so funny and very cute.

There  was a movie called Happy Feet but before that we helped them build Lego then watched the movie.

It was a very funny day. I learned how to take care of a P1 and this will help me in the future. 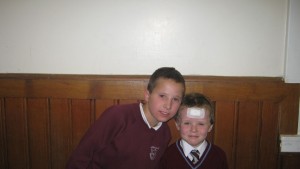 When I went down to meet my buddy he was so nice. I introduced my self to him his name was Kyle. I read him two story books and he listened well. He is a good well behaved p1. I learned that primary ones are important because they are wee and they are still learning. I enjoyed my day with my buddy because I have never done buddying so it was fabulously interesting.

This is our first blog post. We came to school one morning and the teacher had some exciting news for us ! The Judo Instructor had come to teach us some Judo. We went down to the gym hall and we sat down with our partners. I felt excited because I thought it was just a talk about it. When we started I was chosen to demonstrate a move. I cant remember what it was called. After I done that I got with my partner and we had a fight. My partner was extraordinarily strong and I couldn’t get out of the move. The woman  was a gold medallist at the Commonwealth Games in Glasgow. She showed us her gold medal which was quite cool. I really enjoyed judo and hopefully get to use my skills soon!

A huge hello and welcome to our P7 class blog.

Mrs McGowan and the pupils will update the blog regularly.

Remember to check our blog frequently to keep up to date with what is happening in our class!