It is very important to include structure in a drama lesson so it doesn’t become confusing for the children as to what they are expected to do. A step by step procedure will help them slowly progress and build in their confidence as an individual, rather than embarking in a task which is out of their comfort zone and capability. It will help their imagination and help build on any topic work which they are undertaking in class. The children could start by working in pairs to start developing ideas and building on their own experiences, they can then join other pairs to form a group and work together to share the ideas they have created to then lead onto a full group performance. This is beneficial as the activity is structured rather than the children being thrown into activities for them to perform straight away.

Inspired by a range of stimuli, I can express and communicate my ideas, thoughts and feelings through drama. EXA 0-13a / EXA 1-13a / EXA 2-13a

Drama could also be used to further develop their ideas of certain topics which the class may be learning about. An example of this could be when they are learning about different topics for example; Titanic or Natural Disasters. Children can use their knowledge to redevelop scenes in their pairs or groups. This will also help them engage more during discussions during class time and help them to learn from their peers. Their ideas will also develop and flourish. Their imaginative skills will then grow and then they will be able to express themselves in a creative manner.

Last week during Derek’s Lecture, we had an important input on on Racism and Patriarchy. We looked very closely at society’s views and got told about the disastrous event of Emmett Till and how he received the brutality of Racism. Emmett was so badly beaten that even his mother decided to leave his casket open for everyone to see his face as the evidence of the hate crime. Emmett wasn’t the only person who received this hate due to his colour of skin, there were many other people at that time who were treated differently due to their colour of skin and their appearance.

This lecture really got me thinking of how people with a different colour of skin, still may struggle to be confident and voice their opinions due to them being afraid of what others may think of them. Even though times now are better than before, there are still ‘assumptions’ which are made about people who are from a Black or Asian background. Social media and the news also has a huge impact on society and their views and thoughts. We always seem to assume what we read and hear is true, and make assumptions based on what we have seen or heard. We register the information and start acting according to what we hear without realising. The Islamophobia clip we watched is a prime example of this scenario. How a muslim news reported was placed on top of a news article in which he had no connection to. The reason for this was due to the fact that he was seen to be in the same city at the same time of the incident and then was presumed to be involved as he was a Muslim. He started receiving hate through twitter for something he had nothing to do with.

We also discussed the difference between girls and boys and how society has distinguished between the two. ‘Girls should like pink and boys blue’ I used to get told when I was a child. When our rooms were to get painted, the thought of me or my sister getting a room painted blue would be weird, not normal. Even going to watch a Cars movie at the age of 7 I used to get told its not for me its for ‘boys‘. Now I think back and think as to how I myself was brought up was the same as majority other children. Those children who chose to be different were then bullied and categorised as being ‘different’. Another example commonly said by society is that boys are better at maths and physics than girls and girls are better at textiles and cooking. The gap formed in these statements has a major impact on all children these days as boys who want to cook will feel embarrassed or ashamed in doing so and same for girls if they want to pursue a career in mathematics.

Throughout the years, it is amazing to see how far society has come in terms of Woman’s Rights, Equality and Same Sex Marriages. These have now started to become the norm in society and has allowed everyone in society feel equal and included. Now that these times have changed, as teachers it is very important that we do not categorise genders and make sure that everyone in class feels included and equal no matter what their background. If boys are interested in painting their nails, they should be allowed to do so. If girls want to take part in a bleep test, they can. Gender should not stand in the way for letting an individual pursue their dream and fulfil their passion. We should be accepting to all beliefs, religions, backgrounds and ethnicity and teach children to do the same. This way they will be able to create their own identities rather than becoming what society presumes and what society expects. 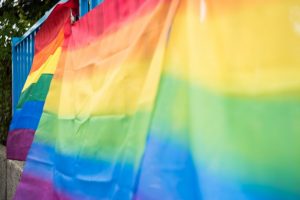 During the Values: Self, Society and The Professions module, we took part in an eye opening workshop where the class was split into 4 groups and were given an envelope full of materials. When the envelope was placed onto our tables, we were told not to touch or have a look to see what was  inside. After being told that by our class teacher Gillian, the urge to have a look inside became so intense we were all on the edge of our seats waiting until she said we could have a look like little school children.

When we were able to have a look, a girl in my group tipped the envelope over to find some paper, pens, paperclips, sticky notes and blue tac. We were then informed we had to create a masterpiece from the materials provided to help a brand new student starting at the University of Dundee. Assuming everyone else in the class had the same materials, we started discussing in my group what to make from what we had. We decided to create a poster which included a map and some useful information for getting around the university. When the time came to present our masterpieces to the class, only then did we realise there were some extra materials which the other groups had and we didn’t. I then thought to myself how was this fair when we all had the same task to do AND it was a competition? This thought didn’t bother me much until we got told we would be graded out of 10. My group got a grade of 3 out of 10 along with another group who received 2 out of 10 for their work. I was surprised at the result, due to the fact that I thought my group had worked much harder and would achieve more. The remaining 2 groups received an 8 and 9 out of 10 and even received prizes! How is that possible I thought to myself? Were we not good enough? Where did we go wrong? The other groups received more praise compared to us as well. It was then we realised the purpose of this activity and by how I felt I was well and truly surprised.

Being a teacher, it is very important to acknowledge the inequalities amongst the children in your setting. Those who cannot produce the work up to a great standard may be due to the limitation of resources they have at home, or the support that they receive. However, what should be noticed is the amount of effort being put into their work and how they have come about putting it together. Some children may have the skills for any task which they have been set however cannot carry it out due to their limitations. What we don’t realise is we may be sitting praising a child for the work they have created, however those with the same abilities and skills will be able to perform the same but are disadvantaged as they may not be receiving the right support at home. It is our duty as teachers to make sure we encourage every child in the classroom equally in order for them to produce the best work they can and praise all children for any work that they carry out. This way children will feel encouraged and they will then thrive to be the best they can be, rather than being pushed back and discouraged. Children’s self-esteem and confidence will also be boosted and it will help them develop further in their education.

This activity really got me thinking about the way some children may feel when they are treated differently and not equal to those around them, no matter how much effort they have put in, whether it be more or less or depending on their home situation. The feeling I felt when the other teams scored more, due to more resources when we put just about the same effort in as them really astonished me to the fact that some children do get treated and do feel this way in some places. It is now our opportunity as teachers to change this and make sure all children are treated equally and no different from one another.