Activities for unit 1 Personal and Interpersonal Skills and Abilities

** This section should be completed as you identify when/where/how you have used/developed these skills.

On Tuesday the 18th of September, all of us teaching students, social work and CLD students were in lecture theatre 4 together from 9am to 11am. This first part of the lecture was an introduction to the Values module and the second half was learning about the three bias’ we all have as humans. We were informed that their was a study going on at Harvard University about your unconscious bias and they have tests to take about this. I went on to the website and completed one of the tests on weight. The test really gets you thinking and it made me realise how easily I would categorise something without even thinking twice.

Later that day I had my first seminar for this module with Gillian Bartle. When I got to the room we were split into groups of around 6/7 people. Each group got a brown envelope with something inside it. We were told not to touch or look in the envelope until we had heard the instructions for the task. We had to come up with something that we would give a first year student starting at Dundee University using only the materials which were inside of the envelope. When we started we opened the envelope, we had three bits of paper, sticky notes, paper clips, 3 coloured pens and a black pen, elastic bands, blu tac and a small white envelope. We all had a discussion and put all of our ideas in and together we decided that we were going to make a poster with useful information such as, the bus times and taxi numbers, what societies there are to join and useful contact numbers. With another bit of paper we were going to create a map of the campus and then with the last bit of paper we decided that we were going to make something called a ‘chatterbox’ like shown in the picture below. At this point we were starting to struggle with the lack of resources. 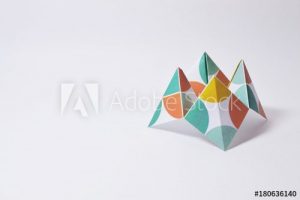 Time was up and we had to present our ideas to the rest of the class. We were all giving a limit of two minutes to discuss our ideas so that it was fair for everyone and we all had the same length of time to present our ideas. One person in my group volunteered to present it for us. They started off by telling the class about the map we were going to make and then the poster. However we ran out of time before getting the chance to tell the rest of the class about our chatterbox idea. After this we watched the other groups present their ideas. After this we were given the chance to change our ideas, leave them the same or think of something completely different after what we had heard and seen from all of the other groups. This time we actually had to make what we were aiming to give to the first year student.

We discussed that we were going to keep our ideas pretty much the same, however due to a lack of time we decided that we weren’t going to make a big map on one sheet of paper, we were just going to make a small map and put it on the poster. We started the poster by sticking two bits of paper together with blu tac. We had four different sticky notes, on one we wrote about what buses to get and what time to get them and a contact number for a taxi service. On another sticky note we wrote about a handful of different societies that are available to join when starting at the University. On the third sticky note we put the contact numbers of important people that you may find useful as a new university student and on the fourth post it note we wrote about the useful online resources that the student could use. On the poster we also drew a map of the campus. We attached the small white envelope to the bottom of the poster and put the ‘chatterbox’ inside it. We included the ‘chatterbox’ for the new student to use as an ice breaker. On the chatter box we asked questions like “what’s your favourite genre of music?” and “are you staying in halls, a flat or at home?” and the student would fill out all of their answers, then go and speak to someone else who had filled out their ‘chatterbox’ and they could find out about the person and see if they had anything in common. As we tried to use all of the resources that we were given we made the paper clips into hooks which we put into the top of the poster so that we could hang it up. We just had enough time to do all of this and then it was time to present it again. This time we were told our presentation was going to be graded. All groups done their presentations and as I was sitting watching one group I thought to myself that it seemed that they had a lot more and better resources than my group did. Once all of us had presented we were told all of our scores, my group only scored 3/10, another group scored 2/10, then one 7/10 and finally one group scored 9/10. Me and my group were all shocked and we wondered what we had done so wrong for our score to be so low as we feel we were quite creative with the limited resources we had. Gillian then sat on the table and asked what we all thought of our scores and what had just happened. The whole class was oblivious to what Gillian had done. So she asked us about the resources and did we notice that everyone had different. Then she spoke about how she was constantly up around the two tables who had good resources backing up their ideas and helping them, whereas she completely ignored the bottom two groups and if she did she wasn’t encouraging us to do well. Once Gillian had explained this it all became so clear, I had no idea how we missed what she was doing. Thinking about it it was so true, she never came and supported us, all of our resources were plain and nothing exciting and their was not a big variety of different materials for us to use. Gillian also pointed out that when my group and the other group with a lack of resources was presenting she was being very distant with us, she was sat down whilst we were presenting and she did not really show much interest in what we were saying. This was a complete contrast to how she was with the other two groups. When they were presenting, she was up on her feet engaging with them and showing them just how interested she was in their presentations.

The way that Gillian treated us disadvantaged groups really got us thinking about the way it made us feel. We all felt disappointed after we all put so much effort into making something out of the very limited resources. This taught us all as teachers we cannot discriminate to disadvantaged pupils as this is simply unfair. The way it made us feel, it made me imagine how it would feel for a child in a classroom. The child would be very upset by it and possibly more resistant to learn. In the classroom it is essential that teachers give the children equal opportunities and ensure that they are treating the pupils fairly. I feel that this was a very successful lesson in teaching us how essential it is to not prefer specific groups of children in the classroom, even though it is within us to do that, we have to fight it as teachers to ensure equality for every child.

I find it really hard to identify what triggered my passion for primary teaching. One day I was sitting thinking to myself of all the different career paths that I could take and I really liked the idea of being a primary teacher. I loved the idea of being able to make such an influence on a child’s life. I want to be the person who is there to support a child and I want to be someone that a child can put their trust in.

When I was younger I always used to play games with my friends where we would take turns in being the teacher and I remember always really enjoying it. I would make registers using word on the computer and I would make up my own worksheets for lessons. I mean I know it is totally different playing a game as a child, to what it is like in the real life, but even as a child, its is something I was always wanting to be.

In sixth year at school in my free periods I volunteered in a primary school. This was my first proper experience in a primary school and it gave me an insight into what a day in a classroom could be like. I absolutely loved the experience I had, this further confirmed my passion in wanting to become a teacher. Seeing the impact you can have on a child’s life and their learning in such a short space of time was so rewarding and it was then, I knew for sure that I wanted to become a teacher.