… So, What is a convention?

Well…. Normally a convention is a way in which something is carried out. There are agreed rules and criteria which make up the convention. A drama convention is where the actions of an actor/actress are decided by the writer or director and are done so to have dramatic, or desired effects. 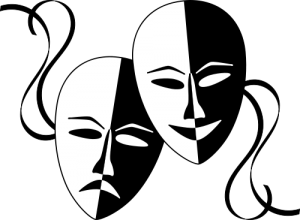 I want to focus in on three conventions, improvisation, mime, and soliloquy.

Improvisation is normally done with no preparation. No script or dialogue is given before the performance either.

This means everything down to who is in the scene, where the characters are, they way they react and the way they move. Everything done is made up on the spot.

Improvisation can be used to get pupils used to speaking without firstly preparing. This will fill them with the confidence when communicating outwith the classroom.

If I was to use this within a lesson, I would do the following:

Provide small groups of pupils either a –

By working in small groups, they get the opportunity to practice and build up their confidence, before moving on and possibly trying a different prop with different or more people in their group/audience.

Mime is a creative form of drama where self-expression and gestures are normally used din place of words. It can be used in a number of ways but is best used to portray a specific movement or task – such as painting or closing a door. 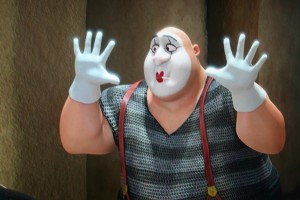 I would use this within drama in the primary to develop my pupils nonverbal drama. Their body awareness expression and communication will all be improved by learning about and engaging with mime.

A simple warm up activity that could be done is an expression activity. The pupils should all say only their name, and then without speaking – show on their face through expression how they are feeling. To aid them I would give them a number of emotions to consider such as happiness, sadness, boredom and so on. I would use different expressions as discussion points to develop my lesson. If this was to be repeated over a number of drama lessons – the task can be differentiated as they improve. The pupils can then mime different actions, or even go on to acting as inanimate/animate objects.

A soliloquy is a dramatic speech made by an actor in order to reflect on their feelings. In drama performances, it is directed to the audience to give them an insight into a character’s thoughts – but it is intended that the character is actually making the speech to their self. It is great for the inner thoughts of an actor to be portrayed. 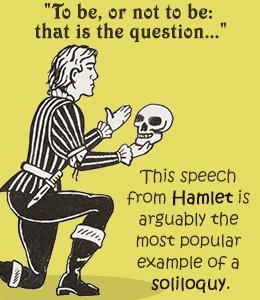 I would use this within drama to introduce different characters. It is a great resource to understand a character better by using examples of soliloquies and will help in developing dramas with a class.

I’d introduce the convention with a practical workshop, where the pupils are given a card with a “speech” (characters “soliloquy”) on it, and allow them to practice performing it to a fake audience (or a partner!). They can then swap and perhaps watch a few of their friend’s interpretations. I would then take the lesson back into the classroom and pull it apart – so they gain a solid understanding of soliloquy’s, but also on the drama we are focussing on.