This is a question I have begun to ask myself after reading Elisabeth Gilbert’s (the author of Eat, Pray, Love) 11 ways to think smartly about creativity (2015). Creativity is an area which I personally want to develop within myself which is why I initially began reading this article. However, it sparked this question about how to enhance creativity in my classroom. I believe that encouraging children’s creativity is an exceptionally important aspect of education as it is all too easy for teachers to destroy this and something which children may never get back.

Gilbert (2015) believes that “if you’re alive, you’re a creative person.” Through coming to university and encouraging myself to try new things (such as blogging) I agree with this statement, you just need to find the medium of creativity for you. Although, as a child I may not have agreed with Gilbert like I didn’t agree with my music teacher who believes everyone can sing (though I certainly can’t). However, as a teacher I have said very similar things to kids in my class about their creative work.

My thought process through doing this, as every time I say this I think back to my music teacher, is that I am trying to maintain a positive belief in every child about their own work. Although I know that not all creative mediums may be a child’s forte I think it is important to encourage them to look positively on their work and maintain an attitude of trying.

Colin Barras (2014) concludes his article discussing creativity by stating that “everyone accepts you can’t teach genius” so suggesting that you can’t teach creativity either as amazing art skills are innate within certain people and you can’t create this. However, he believes that developing creativity is more about encouraging day-to-day creative thinking in all aspects of life. Thus suggesting that creativity should factor into every lesson in my class and not be confined to a set lesson time such as art class.

Gilbert (2015) continues this argument to suggest that we need to remove the idea that creativity needs to be perfect and that we need to move away from the anxiety created when thinking that something needs to be perfect and that creativity is something that only ‘gifted people’ have. Ken Robinson (2006) believes that f you are not prepared to be wrong you will never come up with anything original.

This encourages me to develop an ethos in my class which encourages mistakes as I believe mistakes are as influential in learning as getting things right. Although, this is possibly an outlook on life I have developed over time as I have made ‘mistakes’ through my own education. However, as a child all I could see were the people in my class always getting it right, and this discouraged me from making mistakes as I felt that mistakes meant that I was wrong and less able than the others in my class.

Gilbert (2015) further suggests that creativity should be encouraged through curiosity as all creativity begins with an interest in something. She develops this argument to say that inspiration isn’t created within you but actually comes to you, and this is possible through being curious and exploring new avenues.

Education Scotland (No date) have launched a ‘Creative Learning Plan’ developing creativity skills in every child, as this is to prepare them for life and work. They encourage 4 main skills which are applied across Curriculum for Excellence to encourage creativity; curiosity, open mindedness, imagination and problem solving. So suggesting the many avenues which a classroom teacher can use to encourage creative thinking and to change the idea that you either are or aren’t creative. 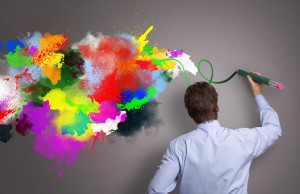 At the same time, there is an argument suggesting that schools are killing creativity within their classrooms. Barras (2014) suggests that this is due to standardised testing as they encourage children to conform rather than to value thinking differently. Back in 2006, Ken Robinson argued that schools do in fact kill creative spirit. He believes that creativity is as important in education as literacy is, as it is becoming an important skill to have in the work place. Further supporting the argument that creativity should be a core aspect of any school day and curriculum, as children should be allowed to explore their imagination and the different mediums to do this.

Robinson (2006) goes on to state how every curriculum has the same hierarchy of subjects, maths and languages at the top and arts at the bottom. This suggests how creativity can be seen as a less important skill to develop within education as there is not the same emphasis of it in any curriculum model. In some ways it can be seen as a less academically challenging choice to choose art or something similar as an exam subject. Further supporting the argument that testing ruins creativity in pupils as there is more focus on the ‘academic’ subjects to pass at an exam level and entry into further education courses. Maybe this idea about creative subjects is initially developed in the primary school though?

In conclusion, I feel that schools need to nurture children’s creativity through giving them ample opportunity and a variety of ways to express themselves in the classroom and core curriculum. I also feel that an ethos of making mistakes needs to be created within the classroom to encourage risk taking and using a variety of methods to achieve a goal. From this research I would also like to encourage an ethos of doing something for enjoyment than necessarily for the future academic benefit in order to help creativity thrive.

Education Scotland (No date), (Accessed at: http://www.educationscotland.gov.uk/learningandteaching/approaches/creativity/about/index.asp) (Accessed on: 2/04/2016)

Gilbert, E, (2015), Fear is boring, and other tips for living a creative life, (Accessed at: http://ideas.ted.com/fear-is-boring-and-other-tips-for-living-a-creative-life/?utm_campaign=social&utm_medium=referral&utm_source=t.co&utm_content=ideas-blog&utm_term=humanities) (Accessed on: 2/04/16)