As mentioned in my previous post, I am utilising my blog as a reflective tool for my Learning from Life placement. My placement is based in an integrated mainstream and special school and I have had the opportunity to work with the pastoral team over the past two weeks to begin my work experience.

Working with the pastoral team has allowed me to experience a wide variety of tasks including safeguarding, interagency practice, working with parents and early intervention, to working with children in order to gather information and promote health and wellbeing. Although a lot of my learning has been through observation and professional dialogue, I have been responsible for: 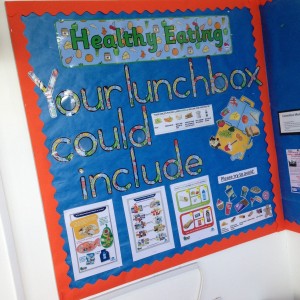 Display board in the Main Reception to support the implementation of a packed lunch policy. 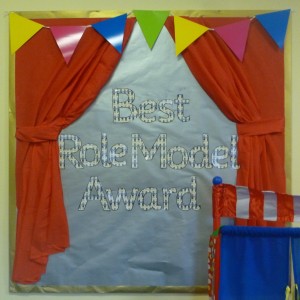 Role Model display board in the Pastoral office to celebrate pupil success. 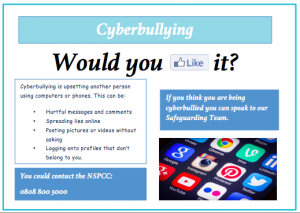 Cyberbullying Leaflet to support the teaching and learning of E-Safety. 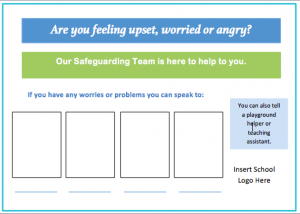 Safeguarding Leaflet for pupil revision. Pupils draw portraits of staff members in the boxes and label members of staff they can go to if they need help.

All of these activities have made a significant contribution to my understanding of health and wellbeing and gathering and analysing information. However the key learning that I believe has had the most influence on my educational philosophy is that gained through observing and independently conducting ELSA sessions.

Intelligence can be defined as the capacity to learn from experience, using metacognitive processes to enhance learning, and the ability to adapt to the surrounding environment. There are many theorists who have contributed to this field of study and have changed our perception of what it is to be intelligent.  In early developments in intelligence research, it was seen that intelligence was a single entity that was determined by how well an individual faired in academia. Indeed, Gardner (1993) stated “In the heyday of the psychometric and behaviorist eras, it was generally believed that intelligence was a single entity that was inherited; and that human beings – initially a blank slate – could be trained to learn anything.” However, more recent studies of intelligence have demonstrated that intelligence is more than just academic and take individual skills and learning styles into consideration.

Gardner was one of the most influential theorists to introduce the idea of individual cognitive components and Smith and Smith (1994) described him as the paradigm shifter. His theory of multiple intelligences demonstrated that in addition to the areas of intelligence that had already been identified prior to his research, there were also factors that took social nature and physical ability into account. Gardner identified 8 types of intelligence: visual, linguistic, logical and mathematical, musical, bodily and kinesthetic, interpersonal, intrapersonal and naturalistic intelligence.

Interpersonal, Intrapersonal and Naturalistic intelligence focuses more on the social element of psychology which formal IQ testing does not incorporate.

Within ELSA, pupils can be supported with emotional awareness, social skills, friendship skills, self-esteem and anger management – similar to the emotional competencies identified by Goleman. In order to teach these competencies, known as emotional literacy, pupils need to expand their emotional vocabulary and develop emotional awareness. This is taught through planned sessions using games, stories, pictures, puppets and role-play etc. 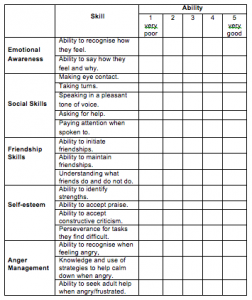 However despite these ELSA sessions being planned with specific intentions, the key principle that permeates emotional literacy support is the ability to talk and discuss how certain situations in your life are making you feel and putting the emotional competencies into real life situations.

However, these circumstances can be difficult to discuss when children are put in a formal situation with lots of directed questions. The most effective way, I have observed, in gaining information, is establishing a safe, comfortable environment, where the pupils feel free to share what they are thinking. Play and practical activities provide the perfect atmosphere to do so. Furthermore, the child should be prompted with related questions, rather than asking direct questions about the child’s circumstances. For example, when playing with Lego in an ELSA session, the teacher may ask, “Do you play with Lego at home?” followed by, “What do you like doing at home?” or “Who do you like playing with at home?” These questions often trigger the child to discuss problems or things that concern them.

Other strategies I have observed during my placement that support pupils with additional needs include nurture groups, such as gardening club or arts and crafts clubs at break or lunch.

How has ALL of this impacted on my Educational Philosophy?

I think the most important thing that I have learnt from these two weeks is that children need to be heard. When children feel like they are not being listened to or are desperate for attention and nurture, their immediate reaction is usually to behave unusually. This may be disruptive behaviour or contrastingly introverted behaviour. However in the cases that I have observed, these have been due to a want for talk and time with an adult.

Consequently now I would aim to observe changes in behaviour, and perhaps record these (like the school does) in order to track and monitor pupils who may require additional time. I will assure pupils that I am always available to talk and I will try to find time for pupils, who do require some support, to play during lunch or break, and discuss their circumstances with me in a relaxed environment.

I will now consider appropriate prompting questions and practical activities to support these sessions. Any suggestions?