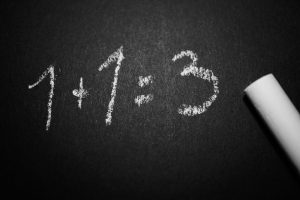 Do I like maths? I have to answer that from my own experience with a resounding no. Actually, in school I hated maths. This got me thinking, is that not a worryingly common phrase, which is not quietly muttered by pupils but instead shouted with pride and worn as a badge of honour? Too often, situations are encountered in which it is ‘cool’ to hate maths, with Latterall suggesting that there is less embarrassment for maths failure than language (2005).

Who among us has not experienced breaking out into a cold sweat when called upon to give an answer to multiplication and division problems written on the board? Or when asked recount your 9 times tables in front of 30 pairs of equally nervous eyes? Why are they nervous too? Because they could be called upon next of course! I can remember sitting in class, tuning out the unfortunate pupil chosen for this task and instead, scrambling through my timetables myself in case I was Mr Smith’s next target. Panic when shouting out test scores? Refusing to participate when giving answers through fear of being wrong? Feeling inadequate in your maths knowledge? All symptoms of maths anxiety. According to Skemp, maths teaching is fast becoming a conditioned anxiety stimulus (1989) and this has got to change.

Maths anxiety is in fact, regarded as a serious issue within mathematics teaching, both in primary education and secondary. It can have multiple places of origin for children including their home environment, within society and in the classroom (Shields, 2005).

Just because children leave the classroom at 3:15pm, it does not mean that they leave their feelings (and fears) about school at the reception. Parents have a significant role to play in a child’s development of maths anxiety. I, unfortunately had two parents who differed immensely in their feelings towards maths, and both had an affect on my maths education. My mum regularly spoke of her confusion for maths and it’s lack of importance. By giving it this low status and disregard, she was in turn feeding my negative feelings (Fraser and Honeyford, 2000). However, my dad was at polar opposites of my mum’s view. He was assertive in the importance of maths, causing feelings of disappointment and despair due to the high value placed upon it, again feeding into my anxieties surrounding maths (Dossel, 1993). But do not fear teachers! This does not mean our job is futile, instead it makes the teaching and encouragement of the enjoyment of maths much more important within a classroom.

A teacher’s attitude towards maths can have a huge influence on anxieties. By showing a love of maths (and really meaning it) pupils can begin to accept that maths just isn’t that scary. Instead of panicking when writing out the method to a particularly tricky question, heart racing, sweat dripping (guilty as charged) allow children to understand that it’s okay to make a mistake, stay calm and enjoy what you are teaching. We as teachers are instrumental in creating positive and active learning environments, incorporating maths puzzles and games into explanations and examples. Maths anxiety can easily translate into pupils exhibiting a lack of involvement, and even behavioural issues (Newton, 2015). Research has also confirmed that maths anxiety is linked to poor maths performance. Children should instead be provided with regular confidence building exercises that look challenging but enable all pupils to do well (Maloney and Beilock, 2012).

If you have managed to reach this point without shielding your eyes from too much ‘maths talk’ you will probably be wondering why I have decided to choose discovering maths as my elective, if I hate maths (which I still admittedly do). However, this does not mean that I do not see the importance of maths. I want to use this module as a platform to extend my knowledge and develop a newfound (and admittedly belated) enjoyment for maths and be able to pass this onto the pupils in which I will soon come to teach. I feel that because I have had this irrational fear of maths, which as a result has impacted upon my school career and adult life (even hearing a maths related quiz question on ‘The Chase’ has been known to get my heart racing!), it is even more imperative that I end the chain reaction of fear and dislike of maths through my own teaching. And if that means I have to (God forbid) put the dreaded textbooks aside and instead plan an exciting and engaging maths lesson, then that is what I will do. Having maths anxiety myself, I know how important it is to extinguish this epidemic maths anxiety.