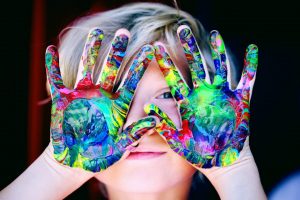 Should children be allowed to use their fingers to help them count?

Children are often made to feel silly for using their fingers to count. As a child, I struggled with numbers – they seemed completely alien and frankly they intimidated me. I was told numerous times by numerous teachers to ‘stop using your fingers! You’re 8!’ I hid my embarrassment well and my fingers for that matter, which spent most of their time under my desk (manically trying to continue the calculation without anyone seeing). If I am being totally honest, I’m still partial to using my fingers to count (don’t tell Mrs Burton!).

So what are the actual pros and cons of finger counting?

If pupils are counting on their fingers, their calculations can become slower. This is not ideal for quick fire mental maths where speed is imperative (though I’m temped to argue here that maths isn’t really about the speed in which children can complete work – but that’s for another blog post). There is also the argument that if you have your fingers with you all of the time, and use them all of the time, there is no incentive to try to memorise and figure out how to do more than just basic arithmetic and it can actually be harder for children than using other visual or memory based techniques (Mukisa, 2010). You can even say that using fingers can give the perception that children are working at a lower level than they actually are and therefore may be given additional support that could be better given to someone else (I’m sure Mr Burton would agree!).

Although these are valid points, they seem to dim in importance when held against the pros of finger counting. Many studies have been completed around the topic, including Berteletti and Booth (2015). They analysed a specific region of our brain that is dedicated to the perception and representation of our fingers (called the somatosensory finger area if you were wondering). Remarkably, brain researchers know that we ‘see’ a representation of our fingers in our brains, even when we do not use fingers in a calculation. The researchers found that when 8 to 13 year olds were given complex subtraction problems, the somatosensory finger area lit up, even though the students did not use their fingers. This suggests that finger counting is not simply a small debate to be made at the teacher’s own discretion but is in fact a major factor for children’s’ development. Butterworth (2016) even goes as far to say that if pupils aren’t learning about numbers through thinking about their fingers, numbers “will never have a normal representation in the brain.”

This means that although there are a small number of reasons why children should not use finger counting, the reasons why still heavily outweigh them. Stopping children from using their fingers when they count could, according to new brain research, be halting their mathematical development (Boaler and Chen, 2016)

So what about people that can’t use their fingers?

There are in fact a number of cases of individuals who lose the ability to use their fingers and simultaneously lose the ability to work with numbers in their head. Henry Polish was 59 when he suffered a small stroke in the back of his left parietal lobe; an area that has an important role in number understanding. He had lost the ability to coordinate the movements of his hands and had lost ‘finger awareness’. Henry was unable to do simple calculations of addition in his head or even dial a phone number (Beilock, 2015). This suggests that allowing children to count on their fingers has less to do with confidence building (which my 8 year old self would tell you is still important) and is actually proven by research on the brain. So next time someone tells you to stop using your fingers because you look ‘silly’, tell them that you don’t want to end up like Henry Polish and let them figure the rest out (maybe even on their fingers).