This week we discovered Pascal’s Triangle – a number pattern in the form of a triangle where the numbers above added together give you a value for a new row. Within this number pattern, there are all different kinds of maths intertwined allowing us to explore it further in depth.

However, whilst learning about old mathematical theories and patterns is interesting, is there a place for them in the modern curriculum?

Although many of the theories were created decades ago they are still relevant and are the basis for the knowledge that is vital to understanding maths. Guiness (2003) highlights that whilst this information may have since been updated or expanded, the original idea that formed a mathematical concept could not have been created without this knowledge. Additionally, researchers across the world have concluded that children learn significantly better if they understand why they learn something and not just how (Alexander, 2017). A key CfE principle explored in schools is relevance (Scottish Government, 2010). It is KEY because by explaining and exploring where mathematical concepts come from and connecting it to aspects of the world, we make children’s learning relevant WHICH is more engaging than if this was left out and we begin to lose the ‘when will I ever use this’ line.

For that reason, I would argue that old theories do have a place in the modern curriculum through enhancing understanding.

So how does Pascal’s Triangle and the theory behind it fit into this?

Below is an example of Pascal’s Triangle made up of 12 rows (This can be endless). Each row is a result of the product above it. For example: the third row is made up of the numbers 1 3 3 1 and the fourth row is made up of the numbers 1 4 6 4 1. This is done by adding 1 + 3 to give us 4, 3 + 3 to give us 6 and again 1 + 3 to give us 4. What an interesting concept. However, this is not all the triangle does and this is where we can make an old number pattern and theory relevant to what the current curriculum teaches. After exploring Pascal’s Triangle, it became clear that when broken into smaller pieces it is actually made up of different number patterns. 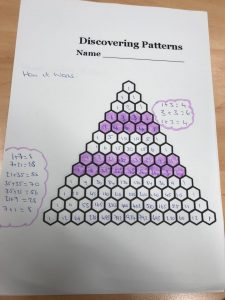 Parts of Pascal’s triangle, when added together, make up square number patterns. As shown below, 1 + 3 is 4, 3 + 6 is 9, 6 + 10 is 16, 10 + 15 is 25 and so on. Whilst this is not a massive part of the primary curriculum, it shapes a section of secondary maths which is vital. By using basic addition, taught at school we start to create multiple patterns that we were previously oblivious to. Furthermore, a simpler way to argue its relevance in our curriculum is to go back to the basics of how we form the triangle. ADDITION. This is a basic concept taught from the age of 5 which allows pupils and teachers to connect concepts and work out solutions but also enables society to work (Haylock and Thangata, 2007). Teachers who will take on the challenge of teaching about Pascal’s Triangle are teachers who work through the stages of Liping Ma’s (2010) 4 concepts when they take a basic idea, explore it and then connect it to any relative areas in mathematics. 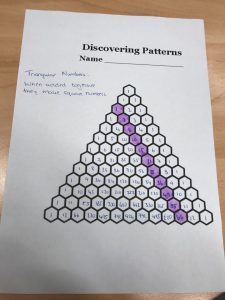 This way of teaching maths, for a child, is so much more intriguing than textbook work. Yet, Robert Floden – dean of the College of Education at Michigan State University (Hartnett, 2016) puts forward an interesting argument about how we are trying to teach maths. He argues that often, when we try to teach maths actively and through games, we actually reduce a child’s learning as they end up carrying on and not actually learning. He believes that by trying to make maths active, children are missing out on fundamental understanding needed to be efficient in areas of maths. Whilst in some cases this may be true, I believe this has more to do with class management and not how we teach maths and for that reason, we should not stop engaging activities. If we set rules around activities, we can reduce the likelihood of bad behaviour when it comes to actually using them.

Boaler (2009) explored two schools who taught maths in very different ways. One school (Amber Hill) taught in a very traditional way. They had goals in the curriculum to meet and stuck to the path to get there. When explored, this type of learning showed that children found it difficult to remember how to do things after a certain amount of time. The other school (Phoenix Park), took a more relaxed approach whereby each concept was explored in a way that could be connected to another making it relevant and enjoyable. The outcome of this was that pupils who had been taught at Phoenix Park had a better understanding of their learning and because of this, they were able to apply it in different situations. This study highlights the point that if we are creative in our ways of teaching maths we open up more opportunities for understanding. By taking basic concepts such as addition and multiplication, we are able to connect these to other aspects of maths such as Pascal’s Triangle and expand our knowledge through our learning. If we were to be influenced by Robert Floden, we would essentially be following the teaching shown at Amber Hill, using a more traditional approach. However, as shown the more traditional approach is not always the most effective approach.

Overall I believe that old mathematical theories and patterns do have a place in our modern day curriculum, however, only when used a specific way. I believe we should use these theories and patterns to enhance maths learning by making it engaging and fun. If we make learning intriguing for children they are less likely to feel negatively towards it.

Guiness, I. (2003) The mathematics of the past: distinguishing its history from our heritage. England: Middlesex University.

Scottish Government. (2010) Curriculum for excellence building the curriculum 3 a framework for learning and teaching: key ideas and priorities. Available at: http://dera.ioe.ac.uk/1240/7/0099598_Redacted.pdf (Accessed: 3 October 2018).

1 thought on “Is there a place for old mathematical concepts in modern day maths?”