If you had said to me this time last year that today I would be sat in lectures genuinely interested in the small parts that make up mathematical concepts, I would probably have laughed. When I was taught maths, it was just maths. You learnt a concept, did some examples and then were assessed on your understanding.. or memory.

When we were introduced to tessellation, I was so intrigued, yet shocked, at my obliviousness to this concept and the amazing things that can be done with it.This week’s lectures in particular have opened my eyes to the idea that maths is everywhere. In music, in art, in biology and so on.

Tessellation is based around shapes which all join together to create a bigger shape or picture with no gaps. For example, regular shapes such as squares, equilateral triangles and hexagons are perfect for tessellation as all the corners in these shapes have a point which links them together. These are known as regular shapes. On the other hand, irregular shapes such as normal triangles, octagons and circles can still be used in tessellation by changing the properties of the shape. This is done in a cut and paste structure and if done correctly can produce some great pictures and great examples for pupils. Escher was a graphic artist who used shapes, adjusted them and then created new shapes that were in the form of animals or humans. However, in order to understand tessellation children must first be taught the properties of these basic shapes and how to identify irregular or regular shapes. In all areas of maths children must have a profound understanding of the chosen area in order for them to maximise their success.

Haylock (2007) discusses the importance of cross curricular activity throughout school and highlights how vital it is for pupils to be informed of the links between subjects. A geometric multiplication circle is something which we studied this week in Discovering Maths and a tool which would be great to use with pupils in a class who struggle to enjoy maths.

A theorist came up with the idea that by using geometry and times tables, art could be formed in the shape of stars. The process works by having a circle with numbers one through to nine surrounding the circle. By picking a times table such as 6×7 we get 42. This simplified gives us 6 and from there on we can join the dots creating Islamic Art, or as kids would say ‘stars’. This shows the importance of primary school kids being able to take a subject like maths and use their knowledge to enhance their creativity in art. By giving the pupils these opportunities we are taking MA (2010) ideas of basic ideas and inter-connectedness and linking them to other aspects of the curriculum allowing pupils to use their multiplication skills and logic.

By carrying out geometric multiplication circles, pupils are participating in maths without realising they are doing a lot of it. A teacher with a profound understanding for fundamental mathematics would take a topic such as shape, apply the basic ideas of the topic such as the sides and angles, connect it to other areas in maths and as a result expand the child’s overall understanding of maths whilst making it significantly more interesting. These children who have these experiences also have the ability to transfer skills from one area to another enabling them to think and connect all subjects to their mathematical understanding.

Here are some examples of Geometric Multiplication Circles: 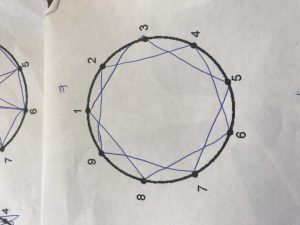 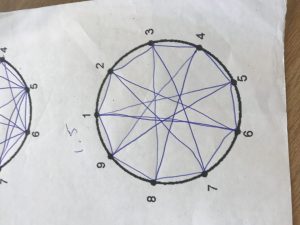 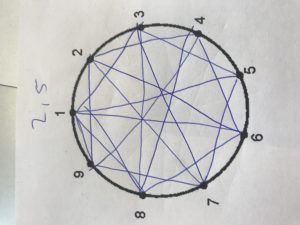 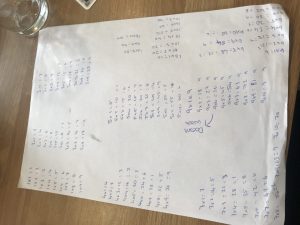 1 thought on “Discovering Creativity in Maths”