After our first science input we were given the task by Richard to think of, and plan, a small science experiment which we would present to our peers in a ‘teaching’ way. Initially, this scared me as I had no clue what to do but after swiping through Pinterest and Googling a bit I decided what I would plan to do. A Fizz Inflator! If you don’t know what this is, (I didn’t either), it is basically a chemical reaction which occurs when bicarbonate of soda is added to vinegar and then blows up a balloon. Seems straightforward enough…

Not for me… I looked the experiment up numerous times and on a few websites, it said you could either use bicarbonate of soda or baking powder. So off I went to the shop to buy baking powder and vinegar. Wrong Choice. After buying the materials I needed for my experiment I decided to try it out and it is just as well I did. As you can probably guess, it didn’t work and I couldn’t work out why. So, I tried again numerous times because I was so confused. I then decided I would get bicarbonate of soda and try it with that and…IT WORKED!!!! I was ecstatic about this. So, now that the experiment worked it was time to apply it to teaching.

In terms of teaching this, I think I would focus on the Chemical Reaction aspect of the curriculum area and explain that the Vinegar mixed with Bicarbonate Soda creates an acid-base reaction which works to form Carbon Dioxide, a gas and that due to there being no place for the gas to go it then floats up and blows the balloon up. However, I would use the Predict, Observe and Explain process with pupils so that they could think about what might happen and then engage more in their learning.

After carrying out the experiment today in the workshop and reflecting upon the result, I came to the conclusion that it had both good and bad aspects to it. In terms of the good aspects, the vinegar and bicarbonate of soda reacted creating a chemical reaction and blowing the balloon up. However, the flaw in the experiment was that the ratio of vinegar to bicarbonate of soda was not as it should have been as the balloon did not blow up to its full capacity.

I really enjoyed this input and in terms of teaching Science, it has made me much less apprehensive about it as I now know that I don’t need extensive knowledge on the subject in order to be able to teach it and it showed me how to make Science fun in a simple way.

Want to try it yourself? Here’s how: 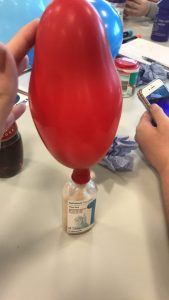 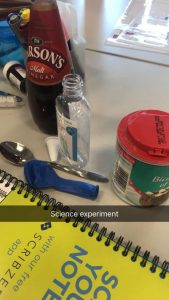 Dr Suzanne Zeedyk and John Carnochan discussed the topic of brain development in their videos highlighting that when babies are first born their brains are still developing and portrayed the importance of this stage in a child’s life as it enables them to understand how to communicate and respond to other people. In the teaching profession, I believe this is essential knowledge for us to have as it gives us the ability to identify any issues within children’s brain development/ progress which otherwise people wouldn’t know about. It also looked at the importance of doing simple things such as smiling at a child and making eye contact with them when growing up as it helps creates links for relationships. However, it is important to acknowledge that not all children will have experienced this as a child and therefore might struggle to communicate how they feel to a teacher. As a teacher, the importance of making sure resources are accessible for all children of all background is essential.

Moving on, the Sugar Crash video shocked me significantly. I had no existing knowledge about this topic and when watching the video, I realised how damaging sugar can be. Things such as 42 million 5 year olds in Ireland being obese in 2013 is shocking however, it was interesting to see this broken down into what was being consumed. This video, in particular, stresses the fact that whilst something may be ‘low fat’ it can be, and usually is, filled with added sugars. Sugar Crash focussed on the physical and mental development of children consuming so much sugar and highlighted the food and health aspect of Health and Wellbeing and the importance of children acknowledging how fatty foods can be.

Last semester started off as I imagine most people’s first semester at university does – quiet, shy, lack of confidence and nerves from being thrown into situations out-with your comfort zone. This was something which I really had to work towards overcoming in my first few weeks at university in order to be successful as a learner. It didn’t occur to me at the start of the semester how independent university was and how true the saying ‘you get what you put in’ was. Out of both modules we carried out in first semester, the one which helped me to achieve this the most was the Working Together Module.

Initially, my working together group was awkward and for a while, this limited our progress. On reflection, I believe this can be linked to us not knowing each other or much about the course and everyone having nerves about their first semester (Schön, 1983). However, this was something we had to overcome.  Gradually, as the weeks went on, members of the group started to contribute their ideas more which helped us to have proper discussions about our tasks and complete them to a higher standard. This, in particular, gave me the confidence boost I needed last semester as it enabled me to share my views and opinions without feeling the nerves that I might be judged. This was the most important moment for me from Semester One as it is where, I believe, my professional development started to grow. Throughout the working together module we were strongly advised to peer assess or evaluate the people we were working with. Initially, I found this to be very hard because I didn’t really know any of my peers and didn’t want to criticize them. After a lot of reflecting at the time, I soon realised that it was more beneficial for myself and my peers to be honest and critical of our work as, inevitability, this was how we would be successful and achieve our goals.

I believe we could’ve used our time more effectively rather than assume there wasn’t anything to do and as a result leaving things till last minute. However, I believe that this is something which I would use as a future goal in my learning. This semester has proven to me the importance of being able to critically reflect on my work thus allowing me to understand how to improve my learning.