On a rather cold, but thankfully dry, Wednesday all 220 of our S1 pupils were involved in an inter-disciplinary project which was part of the National BBC micro:bit Model Rocket Car Challenge called Race for the Line.  Over 400 schools from all over the UK are participating in the competition.  The inspiration behind the national project is the Bloodhound car which is attempting to beat the 1000mph world land speed record and also inspire the next generation of engineers to get involved in Science, Technology, Engineering and Maths.  #STEM

In Design and Technology classes leading up to the Race Day, pupils worked together in teams of 4 to make a foam rocket car creating a design folio which showed how they had considered aerodynamics, friction etc.  In Computing classes the pupils programmed the Micro:bits which were used to carry out the timing mechanism on the race track and in Science they explored the forces which would be applied to the cars.

On Race Day we were joined in school by a team from the Royal Navy who are based at Rosyth and are members of the crew of the new aircraft carrier HMS Prince of Wales.  The Navy team equipped each car with a solid fuel rocket and setup the Race Track in the playground.  Each class took turns to race their cars and the times were recorded for each car.  The Navy had brought along one of their PT instructors so to keep warm pupils carried out a fitness test with a couple of our S1’s managing to reach the fitness standard for the Royal Navy while wearing their school shoes!!!  After racing the cars the pupils then used our new Dual teaching space on the 3rd floor to create some posters to summarise their learning in this project.  Some of these are now on display in the classrooms around the school.

The top 3 car teams went forward to the Regional Final on the 3rd of May when they competed against all of the teams from other school in East Central Scotland @ the Royal Navy facility at Rosyth and 3 also qualified for the Scottish Final at the Barracks at Redford. 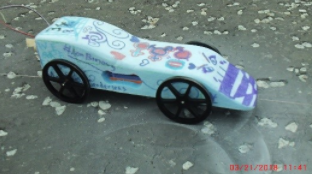 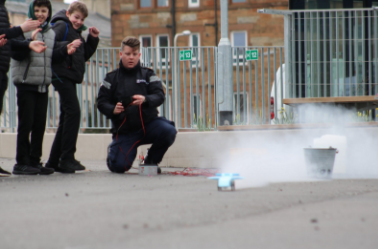 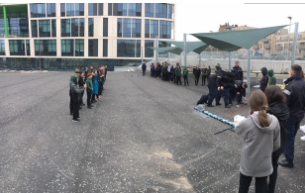