“Is maths important?” my lecturer asked during a recent Discovering Mathematics workshop. My exam driven former self would have explicitly answered no to this question, as I had all sorts of weird and wonderful equations and rules drilled into my head at this point – none of which I have actually implemented within my everyday life, but hey! At least I passed my exam…

As I am no longer in this environment, and have begun my journey back into the
Primary School setting, I have began to re-establish the view that maths IS important. But what caused my shift in opinion on the importance of maths when I reached High School?

I believe that in Primary School we are taught in such a way that allows us to have a conceptual understanding (the HOW and WHY) of the area we are learning, formally known as relative understanding (Skemp, 1989). Whereas in High School, my experience was being taught the ‘HOW’ of a branch of mathematics – known as a procedural or instrumental understanding(Skemp, 1989). Upon asking my Higher maths teacher why we needed to know the likes of the quadratic formula, the cosine rules and how to differentiate an equation, he replied “you don’t – you just need to know HOW to do it”. The fact that my own maths teacher was teaching us based on instrumental understanding may suggest that either; he underestimated the power of understanding the WHY, or he was not required to teach it, so he simply didn’t. As long as we managed to get the answers right, even if we did not understand why it was right, he would say we were doing a good job and were heading on route to pass the exam.

Not knowing the WHY behind the mathematics I was being taught made it seem irrelevant and useless to me, hence why I refused to see its importance at the time. Ma (2010) suggests that having a profound (or relative) understanding of mathematics enables learners to see the ‘interconnectedness’ between concepts, thus they are able to apply their knowledge to a wider range of scenarios than having an instrumental understanding alone. His theory dismisses teaching towards an procedural understanding (like my teacher did), as it restricts the wider connections an individual can make between what they are learning and other areas of the curriculum, and also in their everyday life (depending on the nature of the topic being explored).

My belief that High Schools are teaching towards the objective of passing exams is strengthened by the data released by the Scottish Government (2012), as it shows the percentage of pupils performing very well at the level they are working at in maths decreases by 18% from Primary 6 to S2 (see graph below). This statistic, although not surprising to me, is a shocking reminder that the strategies for teaching maths in High Schools is not as effective as those demonstrated within Primary School. 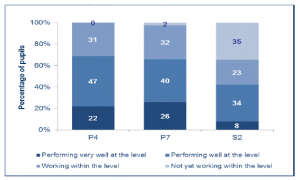 Overall, I believe that mathematics is an important aspect of every child’s education. Although, I believe that its importance is lost throughout High School due to a lack of relative understanding of the concepts that students are being taught, meaning they are less likely to recognise links between concepts and overcome difficulties they encounter within maths problems (Skemp, 1989). This means that they are more likely to adopt a negative attitude to learning maths in the classroom. By giving our children space to be creative (see previous post titled ‘Maths can be… creative?’) and delve deeper into their understanding of different mathematical concepts, we are more likely to develop their awareness of the transferable nature of the skills that can be applied to different areas of maths and other wider connections. This leads to the development of ‘interconnectedness’ that Ma (2010) suggests is critical to having a profound understanding of mathematics, and thus recognising its importance in everyday life.