After a recent lecture on Socio-Political Perspectives on Poverty, I realised how wrong I was about the ‘type’ of people who find themselves in the ‘lower class’ bracket of society. 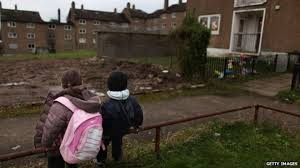 Before going to the lecture, I was asked to write down my views on those who experience poverty; their characteristics, lifestyle, attitude to life etc. I found myself writing words such as ‘scrounger’, ‘homeless’, ‘stealing’, ‘unintellectual’ and the list went on. As I sat up from writing these words, I shocked myself about how easily these demeaning and negative attributes had come from the tip of my pen. I began to feel ashamed as I had always considered myself an open-minded person, able to form my own opinions, and thoughts  about society after considering the perspectives of those within it. How had I come to such a harsh conclusion? Why did these terms appear on the paper without any second thought? Was this really my view of potentially the most vulnerable members of  our society?

After considering my approach to the task for a while, I soon realised that actually, these were NOT my own views; these were my learned views.  But what do I mean by ‘learned views’? I believe that another source has had such prominent views about poorer members of the community that I have unconsciously accepted or abided by these generalisations and stereotypes that they outwardly portray on a daily basis. But what is this incredibly influential source that has dominated my own personal thoughts and beliefs I hear you ask. It is something that is present even when I do not want to look at it, something that is alert even when I am not, something that preys on the weakest and most vulnerable members of  society, and that something is… the media.

The media is notorious for producing ridiculous, one-sided headlines which primarily focus on people who ‘steal’ benefits which they are not entitled to, or are too lazy to go out and find ‘real jobs’. Headlines such as ‘Is Britain a nation of lazy scroungers?’ (2013)and ‘Mother-of-five who pockets £18,000 a year in benefits says she needs MORE handouts because she can’t afford to buy school uniforms for her children (but still manages to spend £20 a week on cigarettes)’ (2016) further the stereotypical view which I adopted in the task around people in poverty, devaluing those who are actually in need and are trying their best to provide for their family.

One particular video which I came across during my research into poverty was ‘I live in real poverty, and it’s not what you think’ in which Kathleen Kerridge illustrates the real life difficulties faced by her and her family in our modern day society.

Kathleen demonstrates how easily it is to fall into poverty without any warning. She challenges people like me who have followed the media’s views and have been coerced into believing that it is their own fault that they are in this situation, that she was to blame. She goes on to explain how none of the events which led to her poverty-stricken status were caused by her actions; her heart attack, losing her job, mastectomy and a bankrupt landlord. I think that this shows that this could happen to any of us, at any time, as she was once in a financially stable position.

Another video which I found which shocked me was that focussing on Shelby’s Story, titled ‘Teenage poverty in the UK’.

I was totally shocked when Shelby revealed she was 17 due to her living AND providing for herself. Being 17 myself, I could NEVER imagine coming home from my work (which I get paid over the minimum wage for) to my home with 2 rooms, no cooker and no bed. It made me realise that anyone can be a victim of poverty – poverty does not discriminate against age, gender or race.

I sat down again after researching Poverty in the UK and wrote down my revised perspective on poverty after seeing and hearing what poverty means to those who experience it daily. ‘Misunderstood’, ‘ordinary’ ‘unfortunate’ and ‘hard working’ were a few that I came up with, what I should of come up with to begin with.

As I sit typing on my laptop that I got for my 14th birthday, in my University flat, with my family and my dog in my 4 bedroom home 40 minutes away, I start to wonder what I will have for my tea. This is not because my cupboards are bare, or because I cannot afford to buy another meal like Kathleen or Shelby, but because I bought too much food when moving into my flat… and this is when I realised what real poverty is.

After receiving an input on race, ethnicity, patriarchy, discrimination and prejudice as part of the Values module, my understanding of the topic has significantly changed.

Before, I believed that was racism was becoming a ‘thing of the past’, which we had acknowledged as a society in order to see past the views of those less kind and stereotypical. However, I have come to realise (after interacting with the slides on the PowerPoint titled ‘Things have moved on haven’t they?’) how incredibly static racism still is in our modern day world. I was terribly shocked by the sheer quantity of case studies, events and news stories (included in the materials shared for student use) which all covered issues based on people committing acts of racism in the 21st century. This included the riots and protests witnessed in Charlottesville USA, where people were, and still are, openly allowed to demonstrate their racial views towards Jews and other ethnic minorities.

Also, I had always seen ethnic groups as being based upon your race, culture, religion or where you were born, for example, British, White, or Christian. I now understand that ethnicity is actually a ‘social phenomenon’ (Giddens, 2013) which is not based upon ascriptive characteristics, but evolutionary devices such as the prohibiting or intermarriage. This shows how easily people can misinterpret words or phrases which we use on a daily basis due to our lack of understanding on the topic.

One of the many statistics which showed how black people are still treated as lesser individuals is that black people are 3 TIMES more likely to be killed by Police than those who are white. I was absolutely appalled by this fact as it highlights how persistent racism is even today. It also shows that our legal systems and governments have failed to provide a duty of care to their black citizens.

Overall, I was seriously taken aback by how common these horrendous acts of racialization still are within our modern day society. I previously thought the government were doing enough to tackle these events, however, I now believe that they (especially America!) need to revise their strategies on tackling racism in order to make the world a safer place for everyone.

As part of the first Values Workshop, we were split into 5 groups, each of which received an envelope containing stationary items. The aim of the task was to produce a pack, using the resources in your envelope, for new MA1 students. This would be given to them at the start of their University journey.

My group, Group 1, opened our envelope to see that we had a huge amount of stationary and craft items to use in order to make our pack. We decided to make a ‘Student Starter Guide’. This included the following:

Derek was extremely enthusiastic towards our group, encouraging us every step of the way – he even offered us biscuits! We thrived off his energy and support for what we were making and felt proud of ur creative abilities. He kept us motivated and engaged in the task by continually checking in on our progress and praising our designs.

When it came to presenting our pack, it came as a great shock to me and the rest of my group to find out that Derek’s praise and the resources given to each group were not shared out equally. It turned out that, actually, this was planned! Some groups had as little as a few post-it notes, a pen and a paper clip in their envelope, whilst my group sat there with piles upon piles of unused paper and other resources. The encouragement each group received from Derek also varied depending on how many resources you had; the more resources you were given, the more praise you received. This was demonstrated right through to the very end of presenting the finished packs, as Derek paid very little attention to Groups 4 and 5 even when they were giving their talks – he even went on his phone during Group 5’s presentation!

We then went on to discuss what this task was really about in relation to the Teaching Profession. The fact that my group did not notice that other groups received less than us illustrates that pupils who come from a wealthy/higher class background and have access to a huge number of resources to aid their learning tend to show a degree of ignorance towards those who are from a lesser background. Also, those who were in the groups which received less equipment did not go to other groups to ask for more. This suggests that those who are from a lower class family and do not have many resources/services available to them feel that they cannot go out and ask for them. It was as if those in Groups 4 and 5 thought that they were not as deserving of the resources as those in Groups 1 and 2, hence why we need to make our pupils aware that no matter what background they come from, they are all equal in the classroom.

As teachers, we need to recognise that not everyone will come to school well-equipped with the skills, tools and support system needed to do well in their educational journey. It is our job to discourage these inequalities amongst children by pushing them to do their best despite the fact that their personal circumstances or social background might be seen as an obstacle which could potentially hold them back.

Another interesting point which was made was the fact that favouring those in your classroom from a higher class background can lead to them excelling and achieving far more than those from a lower class family. This can lead to pupils from deprived areas seeing themselves as ‘less’ than everyone else, therefore, they become unmotivated as they aren’t receiving the encouragement they need to aid success. A member of Group 5 even commented that she “did not see the point” in presenting their finished work as Derek seemed so disengaged in what they had to show, thus highlighting that unevenly distributing praise can have a huge impact on pupils’ motivation.

Overall, I learnt a huge amount during this task and it has opened my mind about the daily struggles we face in erasing the social hierarchy which has been embedded into our system. I thoroughly enjoyed the task and look forward to our next workshop!