The goal of Digital Xtra is for every young person in Scotland to have access to innovative and digitally creative activities regardless of their gender, background, or where they live. You can apply for funding for your extra-curricular Technologies project, especially if you are looking to work with a business or organisation seeking to support digital skills for young people.

The closing date for applications was Thursday, 22 April, 2021 but now is the perfect time to think about how you could use the fund for a project next year!

Heart of Midlothian FC Digital Innovation Centre – Create an App to Save the World   Innovation in Sport A football stadium may seem an unlikely place to learn about technology, robotics, and software programming, but for a growing number of children and young people across Edinburgh, it’s a valuable… END_OF_DOCUMENT_TOKEN_TO_BE_REPLACED

RESILIENT ROBOTICS TEACHING – THE NEXT GENERATION: HOW TO CODE AT PORT ELLEN PRIMARY SCHOOL    A robotics club from Port Ellen Primary School (@portellenps) on Islay has been hailed by Digital Xtra Fund as a great example of what schools can do to equip the next generation with the vital tech… END_OF_DOCUMENT_TOKEN_TO_BE_REPLACED

Flummix – How to Build an Online Shop Encouraging Ecommerce for Everyone In 2019, Heart of Midlothian Football Club created its pioneering Innovation Centre, sponsored by Baillie Gifford and powered by Dell Technologies. One of the key goals for the centre was to create educational programmes which would provide… END_OF_DOCUMENT_TOKEN_TO_BE_REPLACED

The following Editorial appeared in The Herald on 21 October 2020 as part of their ongoing series about the Future of Education.

With the aim of providing  every young person in Scotland with the skillsets to thrive in the digital era, Digital Xtra Fund’s Kraig Brown envisions a future where every pupil can play a part in the online revolution. By Andrew Collier

COMPUTING studies have long been a subject of intense debate within Scottish education. At a time when digital skills have never been more important, the number of secondary school teachers having this as their main subject has dropped by more than 20 per cent in the last decade or so. This represents nothing less than a core deficiency, as pupils lacking a solid grounding in computing and IT are at a distinct disadvantage when they go on to further or higher education or a job.

Various attempts have been made to resolve the issue, including a 2014 plan by Skills Development Scotland and ScotlandIS. The Logan Review [Scottish Technology Ecosystem Review], published a few weeks ago, called for computing science to be treated as an essential subject in the same way as maths and physics. By and large Logan has been well received, though some within the sector feel that its ambitions could have gone further. Among them is Digital Xtra Fund, a Scottish charity created in 2016.

Primarily backed by business partners including Baillie Gifford and Skyscanner, it provides grants to schools and organisations and aims to inspire the next generation to understand and create with technology. Its Partnerships & Development Manager, Kraig Brown, is highly supportive of Logan but believes that one important element is missing. He is concerned that it does not sufficiently address the issue of teaching computing at primary level, particularly through extracurricular activities. 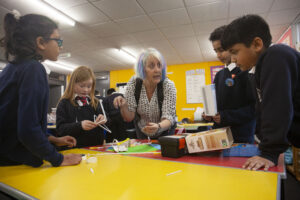 “Logan talks about treating computing science like maths and formally teaching it from first year at secondary school”, he says. “I’m particularly interested in how we approach digital skills at the primary school level.

“The report should have included another recommendation stating that a focused and coordinated campaign to upskill all primary school teachers in Scotland in digital skills needs to be undertaken, starting at P5-P7.”

In addition, he says, teachers should be given examples and partnerships to demonstrate how computing skills relate to the real world from the perspective of a primary age pupil. Brown thinks that an introduction to computing at primary level will help to focus the thoughts of pupils at a critical time in their development. “I agree that it needs to be mandatory from S1.

“However, if you do this, you’re still not going to win over the hearts and minds of young people, and particularly young girls. Even by then, they have a stereotypical impression of what a career [in tech] is.” He strongly believes that coding should be taught at primary level.

“I understand that’s easier said than done, and teachers aren’t as confident about this as they probably could be, though some do a fantastic job at this. Again, P5 to P7 would be a good place to start.” Learning basic coding, Brown adds, is no more difficult than learning to read.

“I have a distinct memory at the age of seven or eight of learning to code using Logo on an early Apple computer and the feeling of ‘I did that!’ which came with it. If someone had also told me at that time about the kind of future I could have had with these skills, it would have blown my mind. Why is it that 30 years later we are going backwards at a time when the world becomes more digital?”

Creating linkages between teachers and industry has obvious advantages, though he recognises the scale of the challenge. “A big part of what I try to do is to get our partners involved with the extracurricular activities.

“That’s a lot easier said than done, though. People are working in their Monday to Friday jobs and they maybe aren’t as confident stepping in front of a group of 11 year olds as they would be appearing in the boardroom. They’re not sure how to teach or approach those children and they absolutely do need help from the teachers. But the teachers also need to know how to work that into their time, which is at a premium.

“We do need to do this though. I appreciate that may mean a couple of other things need to be bumped out [of the teaching programme] and not everyone is going to agree with that. But the way the world is going, we have to do it – if we don’t our young people will be left behind. Leaving it until S1 is too late.” 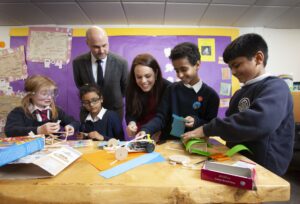 If this approach is to succeed, he concedes, it will need support from the very top.

“Head teachers and deputy heads would need to buy into it before the teachers, but they need resources given to them by Education Scotland, by local authorities, and by the Scottish Government and the SQA.

“There are also plenty of other organisations that could get involved, he adds. “There’s the Edinburgh Science Festival, science clubs – there are loads of bodies that could help. I would love every school in Scotland, both primary and secondary, to have a coding club.”

He also believes that this primary-led approach could help address the gender imbalance in computing as long as it is presented correctly. “Demonstrating the use of technology for good is a brilliant way of engaging more young women – most girls respond better to collaboration and improving their communities.

“If we can apply tech to those concepts, I think we will immediately see an uptick in the number of young females that are interested in it.”

“Sitting young people down and teaching them commands isn’t going to work. It’s got to be fun. They need to be able to say ‘that’s cool – I’ve done this’ and then ask themselves what’s next.”