Today in digital technologies we were investigating the use of mobile devices within the classroom environment. I was unsure what this session would entail as this covers a very wide range of different technology. According to the Governments’ Children’s Parliament (2016) devices such as kindles, iPads, computers, cameras, Leappads, Nintendos, playstations etc were all used within the classroom for a variety of lessons.

British Educational Suppliers Association (BESA), researched the benefits of mobile devices and consoles within the classroom and evaluated that the use of games consoles and smartphones played a huge role in the education and learning of young people in primary education. 406 responses were analysed by BESA surrounding the use of technology in school and at home. Around three quarters indicated that accessing devices such as Nintendo DS at home were in fact hugely beneficial to the childs’ development throughout school.

Overall, most teachers claimed that they preferred children having access to a computer games console in comparison to a mobile device. With reference to mobile devices specifically, opinions from teachers were hugely varied as Ray Barker, director of BETA claims “On the one hand, 39 per cent stated that children should not have access out of school to mobile phones, while another 29 per cent of teachers said the ideal situation would be if all pupils had access to a mobile”.

The use of mobile devices could be used in a variety of ways to help enhance lessons and a child’s overall understanding of a range of topics and subjects. However, on the other hand I believe they would not enhance every lesson and may become a distraction for children and others around them as they can access anything if they are not under supervision.

Within this session we were given the opportunity to create an “I am” poem which followed a specific structure given to us by our lecturer. The image attached below indicates the theme we chose, and what our creation consisted of. We were then asked to use the easi-speak microphones to record the audio to match the corresponding line in the poem. This audio was then inserted into a powerpoint document in which we were to add visuals based upon the line in the poem and share our creation with others. I found this very interesting and fun as the task was very lighthearted and also enabled our imagination to run wild with the different possibilities this poem could lead us to. It was also informative however, as it was easily identified how this lesson could be given to children in the same format. 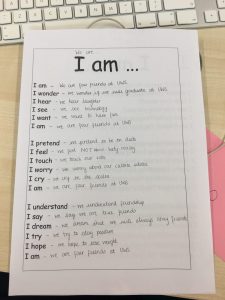 Various experiences and outcomes could also be covered with this activity such as literacy and digital technologies. These include “I can create, capture and manipulate sounds, text and images to communicate experiences, ideas and information in creative and engaging ways (TCH 1-04b/TCH 2-04b)” and “I can spell most of the words I need to communicate, using spelling rules, specialist vocabulary, self-correction techniques and a range of resources (LIT 2-21a)”.

In conclusion, using these devices would include a larger variety of adaptability for many more pupils. It would also allow them to develop skills within the classroom, which could be further enhanced within the home environment as well. Within the 21st century, a good knowledge on how to use this technology would be very helpful for the children as we are moving further into the Digital Age in society.