Within this weeks session we were working in the art studio taking part in a very practical activity. We were linking back to our evocative objects discussed in the first session for this module as a basis for our learning to discuss emotions and ideas that, without this object, our piece of art may not have been as full of emotions or ideas. In a previous session we were given the task of writing down 62 words that we could relate to our evocative object that we would use within our concrete poem. My evocative object was my Pandora bracelet that I wear everyday. These may have been describing the physical object such as; silver, bracelet, charms, describing emotions surrounding that object such as; laughter, happy and growth or describing words about the memory surrounding the objects such as; Paris, 18th or milestone.

My concrete poem was in the shape of the bracelet, including words making up the charms and clasp within the bracelet. I decided yo use wool as the outline for my design giving be a direction in which my words could be written, both above and below the line. I worked on a desk when completing this however many students worked on the floor as their artwork was on a larger scale using a variety of different materials. I also included some purple wire to incorporate into the wool for my bracelet giving it some sparkle that it has on the bracelet and the colour representing my birth stone. I was able to have a table to myself as it was a larger piece of paper in which I could be creative within my piece of artwork. The freedom for children in which they may be given the opportunity to work in a destination of their choice may be useful as it does not restrict their creativity and they get to decide the size of the area in which they work on. This idea is written by Gibb (2012), where they discuss the idea of Room 13, an unused classroom in a school which was redesigned into an art studio where children can work wherever they like within the room and use whatever materials they believe is best suited to their creativity. Pupils are allowed to be as big, bold, messy and creative as they like within this space. Below is my artwork related to my evocative object and concrete poem. 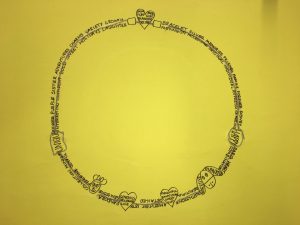 I also believe using the idea of a concrete poem is a useful idea for a lesson within schools as it is cross curricular, incorporating both art and literacy into one piece of work. Lots of time would have to be given to this task as there are steps that must be completed before this could be finalised into one piece of work. The use of an evocative object however may be difficult for children as many of them may struggle to think of something however this could be adapted by possibly asking them to use their favourite toy or something they will have a strong connection with.