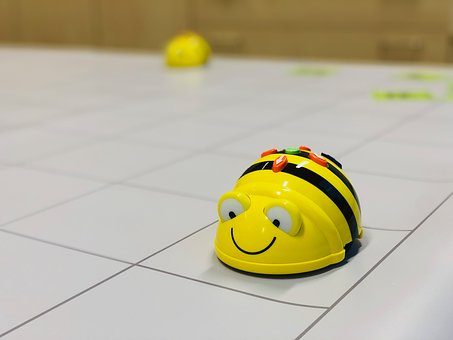 This week’s session in Digital Technologies consisted of creating your own learning mat for the programmable toy Bee-Bot. Bee-Bot is a technological device which can be programmed to do a set of instructions. These include: moving forward and backwards, turning left and right as well as has a go, clear and pause button to assist the learner when controlling the Bee-Bot. The learner can tell Bee-Bot to do up to 40 instructions (Janka, P. 2008). Bee-Bot has many benefits as it can teach a variety of subjects and also allows the learner to be in control as well as have fun at the same time. In my own opinion it is important that we have activities like this since the children are digitally native (Prensky, 2001) and are generally more engaged due to having the permission to use something technological.

Alison Lydon found that 12 out of 28 children were able to use Bee-Bot independently with no help from an adult (Lydon, 2008, p.2). They gained independence quickly meaning that programmable toys had a positive impact on their learning. This could suggest to us that we should encourage teachers to use programmable toys like Bee-Bot since it can enhance the child’s understanding when in the classroom.

After doing the readings before getting into the lecture and having done some preparation with my partner beforehand, I felt more confident about carrying out the task since I knew roughly what it was I was going to do. We chose to do the narrative of the story, The Gruffalo, in which the child would have to remember the characters in order as well as descriptions to help them go round the Bee-Bot mat. Bee-Bot (mouse) meets all four characters (including the Gruffalo) as well as uses descriptive words to illustrate what the Gruffalo looks like. As they make their way to each character in order, question marks are randomly placed so that they answer a question about the book to enhance their comprehension of the story and to see how much they already understood. Below are some images of the mat we created:

The learning outcomes which we chose for this activity were Lit 1-07a and TCH 1-15a as they were most relevant to what we were creating. The first outcome would be achieved since the children would be expected to answer numerous questions on the book. This would develop their knowledge and understanding of the context as well as reflect on their own understanding of the descriptions. The second outcome comes from Computing Science as they would be demonstrating their problem solving skills by controlling the Bee-Bot as well as having to know the main ideas of the story.

The experience I had this session was interesting since I now know the advantages of using a programmable toy in a classroom environment. I would like to use Bee-Bot in the future as I think it would be a valuable use of time whilst teaching.