The resource allocation task seemed a simple endeavour. However, little did we know how thought provoking such a small and seemingly simple task could be.

As one of the many enthusiastic freshers in the room, I was eager to begin the activity. The task was to create a tool for a new student, using the materials provided in our assigned envelopes. As I emptied our group’s envelope to reveal three paper clips, a pencil, some blue tack and a lone post-it note, I realised that we had a challenge ahead. Not to worry though- everyone would surely be in the same boat and we could display our creativity with the little resources that we all received- couldn’t we?

All of a sudden, I could see that other members of my group were clearly perturbed by the assortment of materials that other groups had at their tables. Colourful paper, post-its galore, scissors, tape and an array of markers nonetheless! The dismay around the table as my fellow group members frantically shook the envelope in case we were mistaken, was a pitiful sight to say the least. Why did the others get more than us?

Although it was soon clear to me that there must be some sort of psychological test taking place, I was determined to make the most of our compromised situation.

It cannot be ignored that through our hardship, my group did bond to a degree. It’s safe to say that we were quite proud of ourselves, having made a 3D map from virtually nothing. Although it wasn’t anything special, we were confident that the hard work that we put in would surely be acknowledged. Therefore, I’m sure that it was clear to Brenda that the experiment was successful by the utter disappointment on our faces as she scored us a whopping 2/10. After all of our hard work, surely she had made a mistake? Obviously our project could not be directly compared to the other groups. We had less materials. This was the epitome of injustice. This was so unfair.

And that’s when the penny dropped. 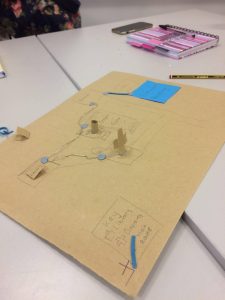 Not only did this experiment reflect the accidental inequality that may take place within a classroom, but society as a whole. Brenda’s attention throughout the session was primarily focused on the groups with more materials. It almost felt as if we had done something wrong, or that she had some sort of personal vendetta against us. She was focusing on the other groups (who did not necessarily need her help), whereas we were somewhat bewildered by how to turn a few paperclips into a useful tool for a prospective student.
Brenda highlighted to us how important it is to treat all pupils equally, which sometimes, does mean giving certain pupils extra attention. She also highlighted that it is important to find a balance; varying techniques for different levels, abilities and circumstances.
There was a definite juxtaposition at the end of the session, as the individuals with a plethora of materials went from feeling positive about their projects, to guilty that they did not share with the more deprived groups.

This experiment exposed the fact that those who are more privileged, may not necessarily notice the situations of those less fortunate. The only groups who mentioned the amount of materials supplied, were the groups with less than the others. The fact that none of the groups with plenty of materials questioned why they had more than the others, highlighted how it can sometimes be difficult to notice inequalities when you yourself, are not personally affected.

As teachers, we will be faced with classes full of children from a range of different backgrounds; with a range of different upbringings. Some children face so many changes in their lives. For some, there is a lack of stability with few constants present. However, a teacher is a constant within a child’s life. Most children, from the age of three to eighteen years old, will always be able to rely on their teachers. Therefore, they have a duty of care to make each child feel valued; a duty to be aware of those who may need a helping hand, in order to ensure that everyone feels integrated.

2 thoughts on “How Our Resource Allocation Task Reflects Society”