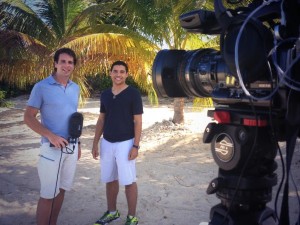 As part of our ongoing series of Glow Meets, we’re delighted to confirm that intrepid adventurer and jet-setting BBC reporter Mark Beaumont will be joining us on Tuesday 29th April. You can register to get involved here.

Mark is currently working his way around 70 nations and territories of the Commonwealth, following the Queen’s Baton as it visits the countries who will be heading to Glasgow to compete in this summer’s Games. His journey has so far taken him to Asia, Oceania, Africa, South America and the Caribbean as part of a trip which began when the Queen’s Baton left Buckingham Palace on 9 October last year.

On Tuesday the Baton will be in Ottawa, Canada, and Mark will be joining our Social Studies themed Glow Meet at 2pm to talk about his experiences and answer questions from school students across Scotland.

From Canada the baton will move on to Europe, returning to Scotland on 14 June where it will spend 40 days visiting communities in all 32 local authority areas. The 288 day relay will conclude on the 23 July when the baton is delivered back to Her Majesty the Queen and the royal message contained within will be read at the opening ceremony of the Commonwealth Games in Glasgow. Ahead of the Glow meet, you can find out more about the Queen’s Baton and its journey on the Game On Scotland site and see reports and images on a special Queen’s Baton Relay section of the Glasgow 2014 website. You can also follow Mark on Twitter: @BBCMarkBeaumont