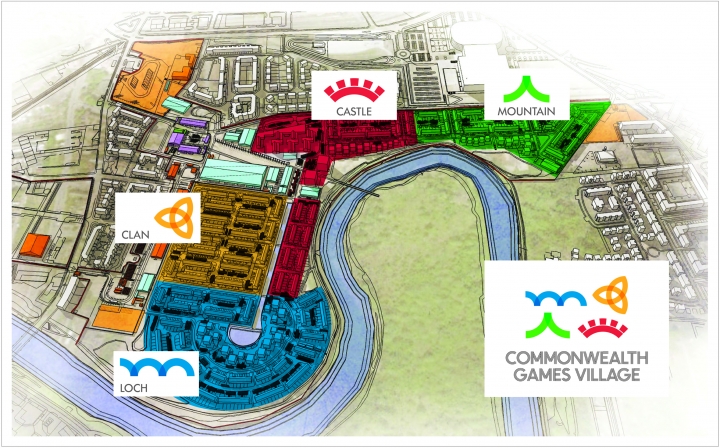 With less than a year to go until 4,500 top-class athletes from across the Commonwealth take up residence in the Glasgow 2014 Commonwealth Games Village, 85% of the homes are already complete. The state-of-the-art facility will also feature a medical centre, shops, recreation areas and 24-hour dining facilities.

The site is Scotland’s first large-scale carbon neutral housing development and will begin its transformation for Games-mode at the start of next year. The Glasgow 2014 Athletes’ Advisory Committee has been involved throughout the design stages of the project to ensure that it is more than just a bed between training and competition.

Athletes and officials will be accommodated within a range of properties – from terraced homes, to contemporary cubed townhouses – within the 35 hectare site which has been developed by City Legacy – a private sector consortium which is working with Glasgow City Council.

It was revealed on Friday (12/07) that at Games-time the Village site will be zoned and has four different areas appropriately named with a Scottish flavour as Clan, Castle, Mountain and Loch.

Ensuring the smooth operating of a Games village is a mammoth logistical task, requiring precision planning. In food terms alone more than 390,000 village meals will be served with more than 2,000 different menu items including 11,600 kg of mushrooms, 10,000 kg of garlic and 500,000 pieces of fruit.

After the Games, the Athletes’ Village will leave a lasting legacy for the people of Glasgow as 700 homes will be available – 300 for private sale and 400 affordable houses for rental.

Thanks to Game On Scotland, your school can get involved, too, by signing up to our Athletes’ Village Art Competition. Every school which takes part will have its pupils’ work displayed in the bedrooms of the athletes and officials – make sure you grab your chance to be part of the action!