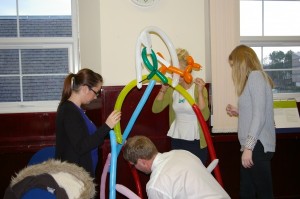 The sessions were active and engaging and  all activities came from enterprise resources which are currently available in Falkirk Schools.

The Probationers were working against the clock and having to be very creative and supportive of each other.  Thinking ‘out of the box’ was the order of the day and this brought with it much laughter and fun.  There was of course a serious message  as the  teams reviewed their work (and teamwork) to identify the skills they had been utilising and developing through engaging in the tasks.

The photographs  show teams using balloons to create a sculpture which reflects the Spirit of Falkirk and then the identified skills pinned up on the whiteboards.

The session included the ‘Shift Happens’ video which brought home the fact that we are preparing young people for jobs that don’t yet exist. Using technologies that haven’t been invented in order to solve problems we don’t even know exist yet. 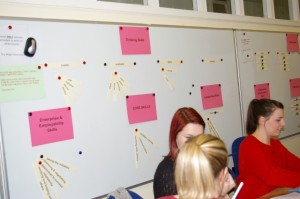