Lenten Stations Of The Cross

As we prepared for Easter a number of our pupils and local priests  celebrated the Stations of Cross.

It was prayed by early Christian communities, especially in the fourth century, when the Roman Empire began to recognize Christianity. Oftentimes, people would make a pilgrimage to Jerusalem to retrace Jesus’ steps from his arrest in the Garden of Gethsemane to being forced to carry the cross to the crucifixion site at Golgotha.

Those who could not visit Jerusalem would use the community’s churches and other buildings as “stations” that represented each stage of what happened to Jesus between his trial and his entombment. Groups would travel from station to station, remembering and praying at each one. The devotion gained even more popularity because it was prayed in the vernacular rather than in Latin, and people could understand what was going on.

Eventually, individual churches erected plaques or other pictorial depictions of all the stations. Stations are usually hung separately, one by one, seven on each side of the church.

Please take time to watch and listen to each station and reflect on the acts of what Jesus did to save each and everyone of us.(If you click on the image below the video will load.) 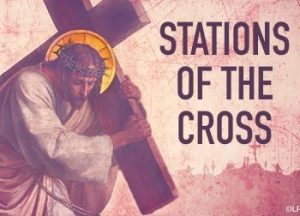 Help us to make our school a place where teachers are valued for their dedication; where pupils are encouraged to develop their talents and where all staff, young people and parents – work together in trust and friendship.