Every year to help celebrate Book Week Scotland, P1-3 pupils are gifted with a Book Bug (P1) / Read, Write, Count (P2/3) bag as part of a government initiative to promote literacy and numeracy at home. And despite Covid ruining most things this year, thankfully it didn’t ruin this (albeit it was a bit late since Book Week was technically 2 weeks ago!!!).

This morning, pupils were presented with their gift bags and got the opportunity to explore the contents. They enjoyed reading the books and playing some of the games contained inside the bags. There was much hilarity with the ‘This is Dog’ book – if you have a P1 Bookbug bag, have a keek for yourself!!  Although this year we were missing the parents (who usually pop in to share in this wonderful event), the pupils were thrilled with their bags.

Please look out for your child bringing these bags home for you to enjoy together. If you’d like any further information or suggestions on how to use the bags at home, check out the Scottish Book Trust website:

We hope you have fun using these with your child!

It was such a joy to be outside today for Fresh Air Friday, as we learnt about food chains, sustainability, recycling, eco-systems and the planting calendar  – whilst developing our teamwork, communication and listening skills in a real-life context which we can use outwith school too. A win:win situation! It has to be said, this could not be done without us having  Mrs Richardson working with us, as her knowledge about gardening far surpasses ours! We are extremely lucky!

As a group, we got chatting about what we would like to achieve in our playground and, collating the ideas of children and with some top tips of her own, Mrs Richardson was able to come up with an action plan! We’re ready, willing and, even more importantly, now have some guidance about what needs to be done to tidy up and prepare the soil for planting!

The pupils enthusiastically offered some suggestions and, working in a group of 8, set to work. Mrs Richardson will be working with us weekly – and will take groups of 8 pupils (a mix from P1-4 and P5-7) to help realise our plans.

Pupils will be encouraged to bring old clothes to school for their gardening stint – which will be on a Friday afternoon unless the weather forecast suggests another afternoon might be better! We will keep an eye on weather reports to see what suits best each week. We might also be looking for some assistance from the community, as our plans unfurl, in the form of cuttings, seeds, planters and tyres. We’ll be in touch…

This afternoon really had the feel-good factor!

We were delighted today to get a good news telephone call to say that a Leswalt Primary pupil is a runner up in the annual Alister Jack MP Christmas card competition.

This competition is open to all schools in Dumfries and Galloway.  Hundreds of pupils took part in it. And, our very own Chloe Kennedy is a runner up!  Chloe’s design will go inside the card, which will be sent out from Westminster.

As a prize, Chloe will receive a certificate and Amazon gift voucher to spend online.

Well done Chloe – we are all very proud of you! 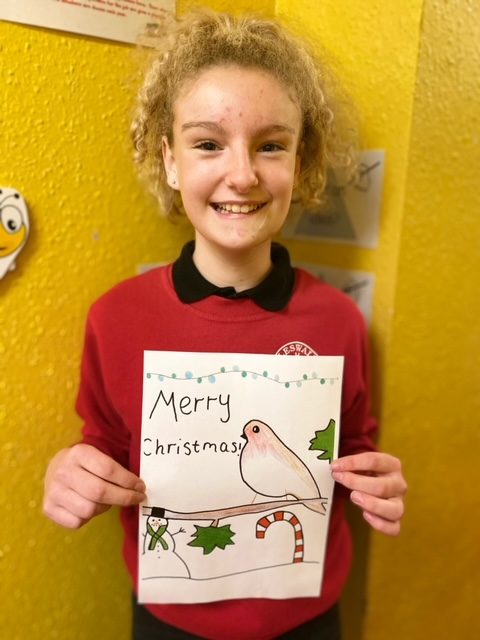 Today was Outdoor Classroom Day, so the pupils and staff of Leswalt Primary headed out into the fresh November air. We weren’t quite expecting the great Scottish midges to be out in force – but they most definitely were!

Still, we all had a lot of fun!

P1-4 started with a morning walk up to the Wetlands. Along the way we said “Hi!” to Mr McHallum who is working hard replacing the walkway there. We gathered a selection of different coloured Autumn leaves for an art project later in the day, and twigs/sticks for out maths tasks. We managed to fit in a few games of ‘Scatter’ in the woods before returning back to school for break.

We used the twigs to solve some maths problems involving triangles. Isla and Ela were victorious, closely followed by Kaiden and Cara. We then had to work in teams to see who could build the biggest twig tower. The P3 group were worthy winners. They communicated well and everyone joined in. Top Team!

In the afternoon we used the leaves, twigs, berries and rashes we had gathered to make firework patterns. We think they look great! We then used out twigs and clay to build our own Guy Fawkes for the bonfire. A Stickman Guy Fawkes!

P5-7 headed out to do a village percentages quiz before returning to the playground and recapping their prior knowledge about the 4 and 8 point compass. They then used sticks and wool to create spider webs – using the 8 pt compass as inspiration. They look really cool! Some pupils even used protractors to check their angles were correct: was N- NE 45 degrees as it should be? This will now lead onto our angles and bearings work which we will be doing in class next week.

After break, the pupils headed to the Wetlands where they heard the historical tale of Guy Fawkes. Clues were hidden for the pupils to find and photograph with their ipads. They then used these to collate facts about the story surrounding the Gunpowder Plot and even used sticks and leaves to ‘ilustrate’ a bonfire on their piece of work too!

In the afternoon, they set up their rainfall collection experiment (which links to this term’s Science topic) and enjoyed P.E. brushing up on their basketball skills!