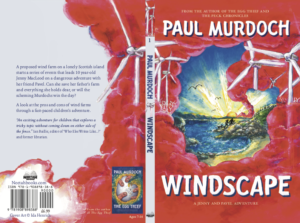 Paul Murdoch is an author & musician from the west of Scotland.

Paul wrote the children’s eco-thriller – Windscape, which was nominated for the Grampian Children’s Book Award. The follow up – The Egg Thief was released in 2017. Paul released Sunny during the Aye Write Festival in 2018.

Paul has over fourteen years experience of author visits; not just in the UK, but all over the world – with hundreds of schools, libraries, specialist groups and festivals attended, he has seen more than 30,000 children in that time.

In an effort to help with remote learning, Paul is putting free teacher packs on line.
Windscape looks at environmental issues through a children’s adventure.
The pack includes a full audio version of the book, chapter by chapter, with accompanying questions and activities. There are also general class activities. It can be downloaded here.

Windscape is available form Amazon in both kindle and paperback formats and directly from Paul’s website.