Hypothesis: With all instructions followed, the lesson should be able to be deemed as good. 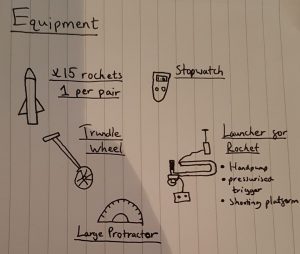 Starting in the classroom, the equation, ‘d = vt’ will be written on the board, the teacher will then ask the class if anyone is able to rearrange the equation to work out ‘v’, calling on the previous knowledge of the class. After a pupil has rearranged the equation, the teacher will then explain to the class that they are going to launch their previously made rockets and use time and distance to work out how fast they were going. This is so the class can learn how to apply the equation and so they can learn how the design of their rockets effects how far they go. As the class is moving outside, the expectations of the class will be restated. When the class is outside, they will launch their rockets at an angle and record the distance they flew and the time it took the rocket to stop moving.

Last Tuesday, the first Values seminar took place led by, in my class’s case, Paul Cowie. My classmates and I were unsure of what to expect from this class, but we were in for a very useful and, more importantly, meaningful session. Everyone was separated into four equal groups and were told that we would be given two activities to take part in. The first one was about coming up with an idea for an object that would prove useful to newcomers, such as ourselves, to the university. The second task was simply to create the idea we had come up with. Each group was given an envelope which contained the materials which we were allowed to use during the tasks; our group’s envelope was full of many useful items, from the common, such as paper and pens, to the more obscure such as safety pins and a rubber-band ball.

Initially, our large amount of supplies proved difficult to work with as we were spoilt for choice. Our experience was different to two of the other groups in the class who seemed to receive a very limited amount of materials. Eventually, we settled on the idea of making a large pack of useful information in the form of a cocktail recipe book, something we felt would be close to the heart of most students. I was selected to, among two other members of our group, to give a brief overview of our idea to the rest of the class. I felt that the presentation, especially my own contribution, could’ve gone better, and yet our advisor gave our group a 9/10, which I silently found curious as we had been marked above every other group.

Next, we had to make our idea. While we were doing this, Paul was walking around the classroom and commenting on the progress of each of the groups. He told us that the idea we had come up with was his favourite out of the whole class, which was a major confidence boost to the members of our group. We weren’t quite finished by the time the groups were presenting their ideas; this was ok though, as Paul allowed us to keep working while the other groups were giving their presentation. Our own presentation seemed to go quite well and once again we were given 9/10, higher than all of the other groups.

Paul then asked us for our take on the task we had been given. Each group gave their thoughts; our group stated that we were happy with his thoughts on what we had created, while other groups offered their distaste to the way they had been treated in comparison to our group’s experience. Paul then told us the point of the task. The task had been constructed in such a way that would illustrate to us the inequalities that exist in some classrooms and in the outside world.

Paul told us that he had already decided what each group was going to get as their score before we gave either of the presentations, he based it purely on which envelope we had been given. This mirrors everyday life, as prejudice is extremely common throughout our society. Unfortunately, people instantly pre-judge those who they walk past in the street, based on skin colour, gender, sexual identity and their class. This leads to certain groups of people being treated differently than others.

This translates into the classroom, as many teachers and over staff do the same thing to the young people in the school. A child’s actions and background often lead to them being treated differently than the other children in their class. If two children, one very nice child and one child that seems to constantly be in trouble, do something against the rules in a classroom it is common for the nice child to be less-severely punished than the naughty one. This Values workshop was a valuable lesson for us to be taught and is something that will impact the way I treat people from now on.

In my opinion, everyone should grow up and try their best to have a job where they can to give something back to society. This can take many forms, from top-level careers such as doctors, nurses and lawyers, to what society perceives as low-level jobs such as labourers. In reality, we as individuals would be lost without the people that practice these jobs as we are unable to complete these roles for ourselves. In my eyes, this makes labourers just as crucial to our development as a society as a doctor. This opinion led me to consider many different career paths during my time at school, from things that were most certainly above my reach, to things that I would never have the patience nor natural skill to accomplish. It took longer than it probably should, but eventually, I stumbled on to the idea of teaching, believing that this was something that I was capable of as I had shown skill in the past.

While the act of teaching children will be developed during my time at University, I believe my natural disposition is something that will help me to take part in the creation of wonderful minds for our future. I have always found that I am a naturally accepting person and I’ve found discomfort in our modern world and our tendency to exclude people for no reasonable reason. One of my areas for concentration in the classroom would be embedding into the children a sense of camaraderie among all their classmates, which would hopefully continue to develop as they grew up which would allow them to be excellent members of their respective communities and also good communicators between different communities. My own ideals with regards to treating everyone in the way they should has also impacted my decision to focus on helping those with special needs and has also led me in the direction of working in areas in which the children do not have the same advantages as others.

Moreover, I would expand this into helping children become good and honest adults overall, not just in regards to how they treat others. One of the major issues we have in society is general dishonesty as this is the root of many troubling behaviours that can crop up in adult life. Being honest with yourself about your own limitations and short-comings is a skill that we should all strive to attain as it allows us to address these issues in our character with the help of others. Everyone will make poor decisions in life, but what is important is that we look at our mistakes and try our best to avoid making them again and that we get help if needed. I would try my utmost to try and help children develop integrity to ensure that they are kind to themselves and don’t have to suffer due to their mistakes. We should all try our best to be accepting of those that have made mistakes as it is the morally correct thing to do. It is for these reasons that I believe a career as a primary teacher would be the best way for be to make my own positive contributions to society.

Read in your language