This section of the website is designed to support practitioners working in South Lanarkshire’s Early Learning and Childcare hubs, who may have access to extra resources or need ideas for larger groups of children.

IMPORTANT – remember to adapt these games to ensure social distancing rules are being followed with participants being a minimum of two metres apart at all times. Here is a link to current advice from the Scottish government on play within emergency childcare settings .

Children evenly spread out in a circle –while holding the edge.

Pull the parachute taut and then lower it between knee level and the ground.

On a signal-all raise the chute upwards; it will fill with air and rise up like a giant mushroom (In the winter-call it an “IGLOO”).

Tip #1: to get it as high as possible, all participants take a couple steps towards the centre as the chute rises.

While holding the parachute tightly, participants move their arms up and down to make small and large waves.

3. TREASURE UNDER THE SEA 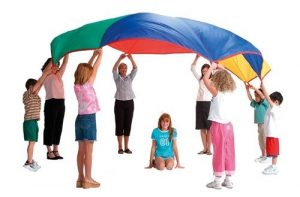 Place a variety of ‘treasures’ (anything you want) into a treasure box under the parachute. Make waves (above) as if in a Sea Storm. Send divers to retrieve called out items one by one from the box.

With the parachute lowered, players raise their arms (and the chute) as high as possible.

Once the chute is high, on a signal-all take 3-4 big steps towards the centre.

Still holding the chute tightly, children sit down at the edge of the chute-under what should appear to be a cathedral.

You need a large parachute for this activity. Depending on the amount of children playing, going around the circle, number the children. Example: 1-2-3-4-5, 1-2-3-4-5, etc.

Call a number such as “3” and all the “3’s” switch places by running under the chute. Loud with running excitement but fun!

Everyone holds the chute stretched out at about waist height. Someone becomes a mouse and goes underneath. Someone else becomes a cat and goes on top. The rest of the group try to hide the mouse by moving the chute up and down.

Each player is given the name of a fruit such as pear, apple, or strawberry. When the facilitator calls out the name of a fruit, everyone with that fruit name changes places by running under the parachute. When fruit salad is called out, everyone must swap places with the players on the other side.

This is a great game for early phonics as well as behaviour.

There are two ways of playing it, an easy way, or a slightly harder way. The harder way is generally much better for social skills and turn-taking.

In the easy form of the game, the adult makes up a quick rhythm (maybe limit them to three hits), using different parts of the body. For example, tap your head once, and then your knees twice. Everyone copies. Then do another rhythm, for example, tap your shoulders, then legs, then feet. The children copy.

When they become good at that, then you can move on to the harder version of the game. In this the children will make up their own rhythm. Start with the first child in the circle. They make up a rhythm of 3 actions, for example, tap head then shoulders then legs. The other copy. Go around the circle, taking it in turns to each have one go. 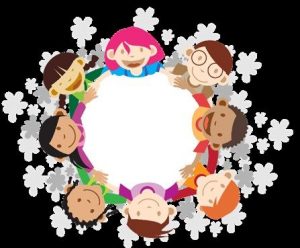 Have three emotion cards in the middle of the circle – happy, sad, angry. You just draw a happy face, sad face and angry face on pieces of paper. The adult goes first to show them what to do. They stand up and act out being one of these emotions. For example, if it is sad they bow their head, hunch their shoulders, mooch around and do a sad face. The children point to which emotion they think you are feeling.

Then it is their turn. One at a time a child will stand up and act out one of the emotions. The others try to guess which one it is. Talk about the body language and facial expressions.

This is a variation on the bear and honeypot games. To play it you need a blindfold, a jar of something and a noisy instrument of some sort – usually a tambourine or some keys work well.

The idea is that you get a child to come and sit in the middle of the circle. They are Baby Bear, and they put a blindfold on so they can’t see. Baby Bear is ‘asleep’. Put the honey behind Baby Bear.

There is now a chant that goes like this: Isn’t it funny how a bear likes honey!

Then Baby Bear wakes up (takes the blindfold off). The bear has three guesses to work out who the thief is.

There are usually lots of clues if everyone stays quite – footsteps, little jingles from the tambourine and other noises like that.

There are many variations of this classic memory game, but here is just one way of playing it.

For this game you need a bag of simple pretend (or real) food and a picnic hamper or box of some sort to put them in.

There is an easy and a hard version of the game. For the easy version, what you do is take one piece of food out of the bag first. For example, let’s say it is an orange. The first person would say, ‘For our picnic we took an orange.’ They put the orange in the box so everyone can see it.

Then the next person goes. They take a piece of food out, for example a banana, and say ‘For our picnic we took an orange and a banana.’

They put the banana next to the orange and the game continues.

This is much easier than the hard version, because you can see the food, and just need to be able to say it in a sequence. For the harder version, the idea is that you put one piece of food into the box and then close the lid so you can’t see it. For example, the first person says ‘On our picnic we took an orange.’ They put the orange in the box and close the lid.

Then the next person says, ‘On our picnic we took an orange and a banana.’ They open the lid and put the banana next to the orange, then close it.

Have one child sitting in the middle of the circle. They put a blindfold on.

Then get a noisy instrument – it could be a tambourine or keys or something similar. The idea is then that the children pass the noisy instrument around, all giving it a shake when they are holding it before passing it on to the next person.

When the adult says ‘stop’ the person holding the tambourine holds it silently.

The child in the middle is going to try to point to whoever they think is holding the instrument. Then do it again.

To begin this game, pass several balls round, but when you say ‘change’ the balls all have to go in the opposite direction. This is not as easy as it sounds!

in the opposite direction. See how you get on! The tricky bit is that some children will get two balls at once. They will have to switch them over to keep them going.

When, and if, the children are doing well at this game, you can then introduce a ‘change’ again. So when the balls are all going around in the two directions, say ‘change’, and see if they can move them back the other way. This takes a lot of teamwork and cooperation!

In a nutshell – First, spread out some plastic numbers in jelly layers. When it’s all set, give out some tongs to children and show them how to pick up the numbers from the wiggly substance (and practice their fine motor skills along the way!). This sensory play is a great way of sneaking in number recognition to something fun and engaging for the children.

In a nutshell – Good, old LEGO. Useful – in so many different ways, here it comes to the rescue yet again. Prepare some cards with colourful blocks on them and let kids discover colour patterns and reproduce them with LEGO blocks. Consider leaving the colouring part to your little learners to include some fine motor practise too.

In a nutshell – Prepare some sticky notes with various numbers or shapes and place them in front of the children armed with fly swatters. The goal of this simple yet fun game is for the little ones to identify the number on the dice or you shout out the name of a shape:  they match it with the ones written on sticky notes before smacking the correct answer with a fly swatter!

In a nutshell – Label small containers with some numbers that you’d like your learners to practice and prepare some straws and pom poms. To play this early years maths activity, the kids simply put the straw on a pom-pom, suck in to try and pick it up and drop over the containers until they’ve got the right number in each one.

This site has ideas for you and your child to continue to learn creatively at home. Use the links above to navigate.

Requests or ideas for this site? How can we help with home learning? Contact: