A wee post about crystal growing and the learning that can come from that !

Another area that I am not so comfortable with but have thrown myself wholeheartedly into finding out as much as I can and what better way that with my children ! ( Hey, If it was good enough for Piaget)

Zinedine’s santa list consisted of a science kit called ‘Glow in the dark science’ and a ‘Crystal growing kit’ ,amongst other things, but I was pleased to see that he was asking for potentially quite educational toys. Secretly I was pretty excited too, not just for the educational element I may add, but more so for the fact that we would get to mix potions and do experiments!

The kit contained several bags of grainy looking ‘stuff’ and several mixing pots and sticks. We had to sort through the grainy bags to find the first one which happened to be …Monomonium phosphate. Which would, according to the instructions enable us to grow Golden  Citrine…

So as a good role model ( and not wanting to miss the important teaching point of being properly prepared) Zinedine was instructed to don the safety goggles ! We had a wee chat as to why this was important and we got started. The instructions stated that we were to pour the grains into an observation disc and examine the properties of the grains.

We had a look and talked about the shape, colour and size of the grains and hypothesized as to what might happen when we mixed the grains with the water. (maths and science all in one … two birds with one stone here!) Zinedine used words like small, spiky, hard, like sand and Safia (my four year old daughter) chipped in with sparkly and pretty! moving on we were to remove 1/8th of the grains and return them to the bag they came from and then measure 68ml of water into a saucepan ready for heating. (more maths, Fractions and measure. ) After the water had been boiled we were to mix with the remaining grains until dissolved. 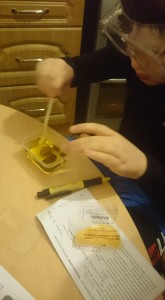 Once dissolved we placed two base rocks in the cooled liquid and sprinkled over the remaining 1/8th of the grains. We recorded the information on the chart including room temperature.

Now it was a waiting game. According to the instructions the crystals would start to form within a few hours.

We continued with a few more in the hope of making Rama Quartz, Aquamarine blue and Pink quartz. Each time examining , hypothesizing, measuring , mixing and observing.

Here are the results thus far, one week later : 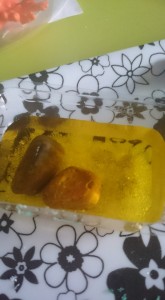 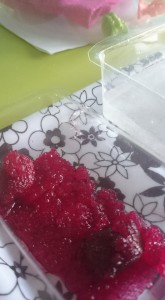 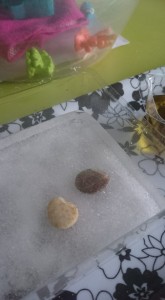 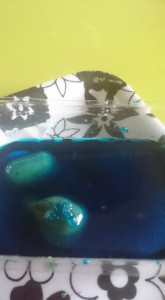 A far cry from the picture on the box : 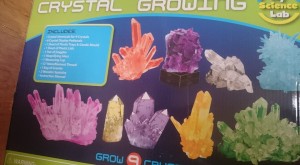 Although intended as a fun way to spend time with the children with  learning not the objective, we all learned a few things from our little experiments. I personally realised that without maths we could not have successfully completed our experiment as we needed to use our skills of measure and without that knowledge the science element could not have happened. This was the realisation of what a symbiotic relationship meant in terms of math and science! One cannot exist without the other. The children developed scientific vocabulary and drew upon their existing knowledge to come up with ways to describe what the grains were like. Although the crystals did not turn out as expected we chatted about what we thought could have been the problem. some of those ideas were:

Although we appear to have some crystals forming the children and I were left feeling a little underwhelmed. We now plan, after discussions,  on dissolving the crystals again, using less water and using larger base rocks.

Perhaps round two will see us having the crystals that appear on the box.