Having had a break from blogging for quite a few months, mainly due to time constraints and most certainly not for the lack of things to blog about. I felt that now would be a good time to restart.

There are so many issues within education that have had me really questioning the way education is heading and all of which have resulted in several conversations with colleagues, professionals and students. All of these dialogues have had me questioning and challenging my own view of education and the expectations that I hold for our future generations.

As a mother of four young children, with one transitioning to high school next year, I worry.

I worry about their future.

I worry about them achieving.

I worry that they are not getting the very best out of the education system that we, as a country, adhere to.

Recently I attended the Scottish Learning Festival in Glasgow where I was fortunate enough to listen to John Swinney delivering a keynote speech in which he talked about creating a “world class education system” . The beginnings of his speech emphasised how passionate he is and also that despite strengths there were also challenges within education and how important to engage with pupils, parents, staff and wider stakeholders. Next on the agenda was what is at the core of Curriculum for Excellence, the values. These values of  ‘Wisdom, Justice, Compassion and Integrity’ originated from the engraving of the Scottish parliaments mace which in turn were words chosen by the silversmith who made the item ! I remember a lecture I attended where we discussed values and surprisingly all 60+ students had differing perceptions of what should have or should not have been on said mace. My point is not to criticise the words or the core curriculum values but merely to point out that individual perceptions vary and it is very much Mr Swinneys view that these words are exactly what CfE is about . (A very interesting blog post about the mace and the inscription can be accessed here.)

At this point I was engrossed in what was being said but my mind was working overtime… On one hand I thought wow this man is passionate and on the other more cynical hand I was thinking …we have known all this for years so why are we still talking about the changes that need to be made?

Not wishing to dwell on Mr Swinney for too long I will leave with the comment that part of the reasons my more cynical side was so annoyed was that much of his speech was not new concepts or ideas they were things that many educators have been discussing for years and the fact that CfE was described as being strong heckled me. ( It has to be noted that on paper and in theory it is a good curriculum with the potential to be great for our learners but unfortunately that ugly snake named perception has changed the way in which many view it.)

Moving on I also attended the Early Years Scotland conference again in Glasgow where a very passionate keynote was given by Professor Ferre Laevers who is the Director of the Research Centre for Experiential Education in Leuven Belgium. Unfortunately there is no link available for that particular speech just yet but there is a very interesting one at this link about encouraging deep learning which in essence was what he discussed at the EYS conference. Again I was engrossed, amazed and excited. he talked about imagination and the importance that it has in a child’s learning. he also talked about the LOI syndrome (lack of imagination syndrome) so often found in management… this certainly made the 330 delegates in attendance giggle and I am sure there were also a few groans. 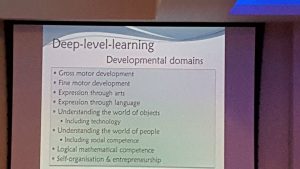 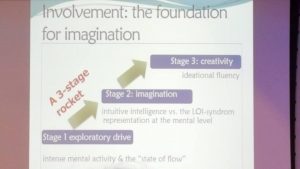 Prof Laevers shared his knowledge of the education system in Belgium and demonstrated the links to our own curriculum and yes I could see the links , I could see where he was coming from and I liked it!

However, despite the fact that again I had just listened to a wonderfully impassioned talk I found myself once again feeling quite frustrated.

Well quite simply very much like Mr Swinneys speech the concepts are not new.

If we rewind right back to the 16th century and take a look at the theory that Comenius outlined of education he:

…what about John Locke, Jean Jaques Rousseau, Johann Pestalozzi, Jean Piaget, Maria Montessori,Tina Bruce… I could go on but what is it that all these people have in common?

They all advocated for child led, developmentally appropriate , active engagement and play.

yes very much like what our own curriculum is designed to be but why is it not happening in practice ?

Why is there a disparity across Scotland in the type of education that is being delivered and most of all WHY are we still talking about the same changes that need to be made centuries later despite having a curriculum that is designed to be exactly what all these wonderful people have been talking about for years.

As with everything there will always be challenges and tweeks to be made and, not wishing to be a negative Nellie, I will end with a slide from Professor Laevers speech which I believe encompasses all I hope to convey in this post. 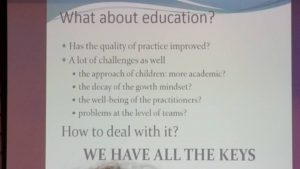