Managing the Implementation of the Plan

The governance arrangements for the SEIC Improvement Plan have been designed to support local democratic accountability whilst at the same time bringing together the key representatives involved in decision‐making across the SEIC.

In order to achieve this, three groupings have been established to provide the relevant staff to drive improvement across the South East region and to provide accountability for the work of SEIC. 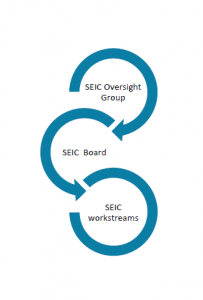 The group oversees the work of SEIC and provides political accountability for the Collaborative’s work.

The SEIC Board is formed of Directors of Education or Chief Education Officers from each of the five SEIC local authorities, a headteacher representative from each SEIC authority, Regional Adviser from Education Scotland, Edinburgh University and Skills Development Scotland.

The SEIC Board meets at least quarterly and is chaired by the SEIC Lead. It develops the Improvement Plan and oversees the progress of the plan and its impact. It acts as the key officer leadership group, agreeing priority areas for collaboration, commissioning workstreams and receiving reports from workstream leads.

SEIC Workstreams accept commissions from the SEIC Board. Officers, headteachers and teachers collaborate to undertake specific tasks, with Heads of Service, senior officers or headteachers taking the lead as appropriate.

Evaluating the Impact of the Plan

The Framework for Evaluating the Quality of Services and Organisations is the basis for the models of self‐evaluation and improvement used for education and children’s services in Scotland.

SEIC recognises the importance of self‐evaluation and the role played by the Framework for Evaluating the Quality of Services and Organisations in supporting effective self‐evaluation at all levels of the school system. During the next phase of its improvement journey, SEIC will agree on an appropriate framework / approach for evaluating the impact of its work and the progress that is being made against the objectives of the Improvement Plan. This will include the impact that is being achieved at classroom level.