Our first Sustainable Development input was on Diversity, which I personally found very daunting. Diversity is such a wide topic and can often be very sensitive so I was nervous that I wouldn’t be able to understand some of it.

Our first input was science with Andrew and to be honest I didn’t know what to expect. Science has never been my strong point, I struggled a lot with National 5 biology at school so since then I’ve been completely put off. However, this input really helped me realise that there doesn’t need to be so much pressure on science and experiments. Our input consisted of moving snails around different environments and dissecting flowers. We also went outside and collected leaves to do leaf rubbings and different types of trees to rub the shape of the bark onto paper. I thought this was very interesting as it made me aware of the large variety of plants there are in such a small area. Therefore, I think this would be a great lesson for future practice as it would show children the diversity of plants in a way that they would remember. It is also something they could do at home and get their families involved in. 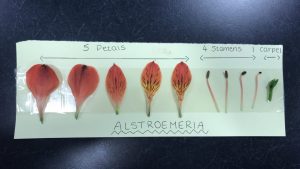 Our second input was from two ladies from WOSDEC, who discussed our probable/preferable futures. Our probable future is how we realistically see our future, whereas our preferable future is how we want our future to turn out.  They discussed with us that one of the main ways that we can turn our probable future into our preferable future Is by being and creating Global Citizens. To help develop our understanding of what It means to be a global citizen we used the ‘Head, Heart and Hands’ method. In doing so I realised that although many of the traits we identified I would say I have, there were also ones that I would say I struggle with. As a student teacher, I think it’s important that I work on developing the skills to become a good global citizen so that I can then pass those traits onto my learners.

During the second week, we were looking at cultural diversity. As a country, we would all probably like to believe that Scotland is very diverse, however, upon looking at some statistics it became pretty obvious that it is not. For example, only 2.1% of Scotland are Muslim, Buddhist, Hindu or Sikh and only 7% of our population were born out with Scotland (Scottish Government, 2011) I believe that as teachers we should be using our voice to promote diversity within our classrooms to show children from a young age that we are all individual and unique. It is stated that children can “inhibit a range of identities that are as confusing as they are defining, not only for themselves, but also for others.” (Copeland and Bowden, 2014, p.386) Our classrooms should be a safe environment for children to be able to express their individuality as they are finding their own identity and where they belong.

The past two weeks that we have looked at the diversity topic have really opened my eyes. I’ve developed new skills and also identified skills that I thought I had but have now realised I need to work on. For example, I need to work on being a better global citizen sooner rather than later, however, I was able to develop my overall mind-set on diversity. I was also made aware of team working and how it can sometimes not go as planned. In one of our workshops, we were all giving our opinion and I made a point about my own opinion and rather than my opinion being accepted I was completely shut down by another member in my group. I found this quite hurting as I thought this was a safe space where we as students could voice our opinions and share experiences to help each other develop. I understand that everyone is different, however, we were all giving each other the opportunity to talk and because someone didn’t think the same as me I was cut off and and they tried to start an argument. This situation resulted in me not wanting to even include myself in discussions or have any opinions about the topics we are discussing. However, after thinking about it, I have since realised that maybe I need to be more open minded about situations and understand that everyone deals with their strong opinions differently.