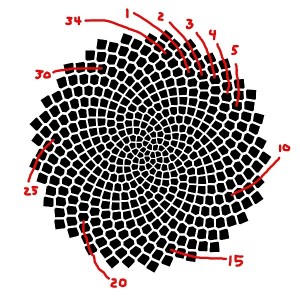 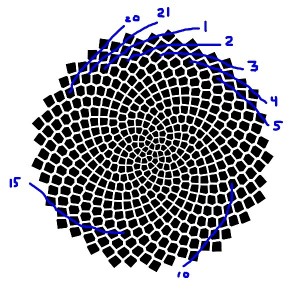 The golden angle plays an important role for the creation of this distinct alignment of seeds. The golden angle is approximately 137.5° and seeds in the sunflower are arranged according to it (Prusinkiewicz and Lindenmayer, 1990, p.100). This angle is irrational which means that no seed has a neighboring one at the exact same angle from the centre (Prusinkiewicz and Lindenmayer, 1990, p.101). This creates the spirals in the pattern of sunflower seeds.

National Museum of Mathematics: How to count the spirals. Web. Available at: http://momath.org/home/fibonacci-numbers-of-sunflower-seed-spirals/ (Accessed: 20 November 2015)

Prusinkiewicz, P. and Lindenmayer, A. (1990) The Algorithmic Beauty of Plants. New York: Springer.

Stakhov, A. and Olsen, S. (2009) The Mathematics of Harmony: From Euclid to Contemporary Mathematics and Computer Science. Singapore: World Scientific Publishing Company.