Yesterday we looked into the mathematics behind board games and this inspired me to look into a game I used to play a lot as a child. At first I was unsure whether there is any mathematics involved in the game Battleships but after doing some research into this game, I came across some very interesting mathematical strategies to maximise ones chances of winning at Battleships. 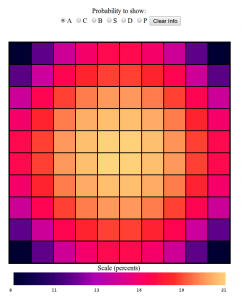 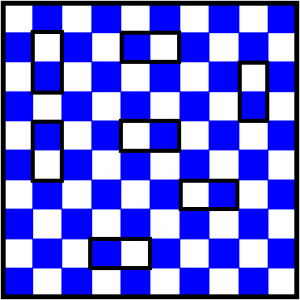 When looking into strategies to win at Battleship further, I came across Nick Barry’s research. He uses a different technique to maximise chances of winning at battleships. By analysing the grid in terms of a checkerboard (left) he could increase chances of a hit. By only firing at either blue or white squares chances of getting a hit are maximised (Barry, 2011). This is because even the smallest ship has to cover two squares.

It would be very interesting to investigate which one of these two approaches, would result in the highest chance of winning at Battleships. This could be applied to my future practice, as students could carry out investigations and draw their own conclusions. Battleship is a game most children know and could create a relevant context for their learning.  Furthermore, this links to the fundamental concept of chance and probability. Therefore, Battleship could be used to reinforce these concepts.

Swanson, A. (2015) ‘The mathematically proven winning strategy for 14 of the most popular games’, The Washington Post, 8 May. Available at: https://www.washingtonpost.com/news/wonk/wp/2015/05/08/how-to-win-any-popular-game-according-to-data-scientists/ (Accessed: 1 December 2015)