After watching a TED Talk by Arthur Benjamin concerning Fibonacci numbers, I was intrigued, to say the least. I have never really heard much about different number sequences and haven’t ever thought about looking into them, until now.

Benjamin talks about how there is a focus on children having to learn calculations that they will need for exams and how he would like to see maths being taught more creatively, along with being explored and enjoyed (2013). I find this very interesting. Throughout my experience with maths, the main thing that has always made me nervous is the thought of getting the answer wrong. As stated in my previous blog posts, I believe this is because I’ve always been taught what I need to know to pass and have never had a profound understanding of the subject.

The Fibonacci sequence was introduced by Leonardo of Pisa, who was also known as Fibonacci. He introduced the sequence to Western Europeans in 1202 in his book called “Liber Abaci”. The sequence begins like :

It works by adding the two numbers before together, to get the next number. For example:

The sequence is often even said to appear in nature. The Live Science website notes that an example of this is sunflower seeds. The sequence ensures that seeds are always evenly distributed. It also appears in a range of other things such as hurricanes and galaxies. 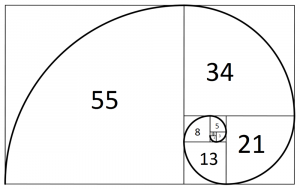 I have found this to be very interesting as I never knew or understood what the sequence was. It has really highlighted to me that there is much more to maths than memorising formulas and calculations for exams and tests and that there is a whole world of maths out there that I don’t know about.

After watching the TED talk and looking into the number sequence myself, I do believe we should allow children more time at school to explore maths. I think this will help with their overall understanding of the subject as well as making it much more enjoyable.

Live Science (2013) What is the Fibonacci Sequence? Available at:  https://www.livescience.com/37470-fibonacci-sequence.html Accessed 17 October 2018)

An input i found very interesting, and thoroughly enjoyed, from the Discovering Maths module, was about how maths can be creative. I have to admit, this thought had never really crossed my mind. We spent time talking about, and looking at, tessellation’s and different forms of islamic art. Although I have seen both of these before, I never understood that maths plays such a big role in their creation.

We first discussed how many sides each shape has and took turns quizzing each other about this. We then moved onto talking about the different types of shape. This included polygons and quadrilaterals, along with talking about regular and irregular shapes. This led us onto tessellation. Tessellation is defined as “an arrangement of shapes being closely fitted together”. We were able to use what we had already discussed to talk about which shapes would be able to do this and which would not. All triangles and quadrilaterals tesselate along with a few regular shapes (squares, hexagons and equilateral triangles).

My favourite part of the input was learning about the different types Islamic art. Many examples of this kind of art have been created by tessellating different shapes. 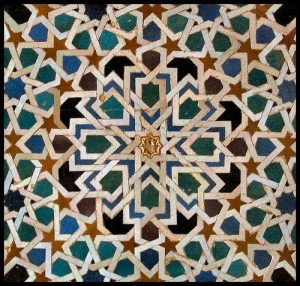 Another example of Islamic art is the design of Islamic stars. We had the chance to create our own Islamic stars. We did this by firstly drawing a circle using a compass, then drawing a series of lines to create shapes within the circle. I found this activity very enjoyable and it highlighted to me that maths can be fun and creative. Inserted below is one I created in the workshop. 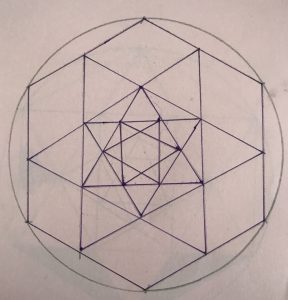 Because I enjoyed this input, I decided to try out a different form of creative maths at home. We were given the link to a digital roots website which showed how you could create patterns (similar to the image above) using digital roots. Digital roots are one digit numbers relating to a numbers times table. For example:

However, when the answer becomes more than a 1 digit number, you add the numbers in the answer together to get the digital root:

Following the instructions from the website, I created a circle using a compass and plotted 9 points on it, numbered 1 – 9. I then drew lines from number to number in the order of the digital roots. I did this for the 2, 5 and 8 times tables creating 3 different patterns. 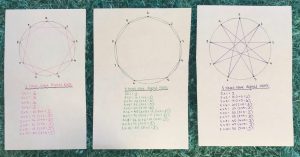 I thoroughly enjoyed this activity and it has shown me that there are many different ways to learn about maths. Often in maths lessons I have felt nervous about activities and the thought of getting the answer wrong has always worried me. However, I found this type of learning to be a completely different experience. It was much more enjoyable and relaxed while still being  able to learn about maths. Therefore, I believe learning creatively about this subject is very beneficial.

Throughout my school life, I’ve had a very mixed experience with mathematics. My earliest memories of maths are from primary school. They consist of the class teacher sitting us down on the carpet, teaching us a concept, and being told to complete the coinciding pages in our TeeJay Maths textbooks. Although this was a repetitive technique, I didn’t mind it. Overall, I would say I probably enjoyed primary school maths.

However, I found the transition from primary to secondary to be quite difficult. My friend and I had always sat next to each other and often worked together during our maths lessons in primary. I remember, very vividly, my first day at secondary school. We sat in rows of individual desks in my maths class and I immediately began panicking that I could no longer rely on anyone else to help me. Not only this, but the teaching was very different. We very much worked in silence with very few people ever asking questions, and I found there to be one key difference. I felt much more under pressure. I never wanted to offer an answer in class, too terrified that I would get the answer wrong.

Throughout my secondary education, when it came to maths, I felt there was a much bigger focus on preparing us for exams than ensuring we thoroughly understood the work. This led to a breakdown in my relationship with maths. It was a case of memorising question types and formulas in the hope that this would get us through the exams. This is why when it came to choosing my subjects and I found out that I did not need higher maths to get into university, I was overjoyed that I would get to drop it as a subject after 4th year.

Looking back now, although I did not enjoy the teaching methods, I do also think the way I felt about maths stemmed a lot from my personal attitude. Myself, and a lot of my friends, often spoke about how we “couldn’t do it” and “couldn’t wait to drop it” as a subject.  I realise now, constantly having the attitude that I would not understand it, did not help my situation. I haven’t done much maths since I finished my national 5 course. Although I knew I wanted to do primary teaching, I didn’t worry about the teaching of maths. The thought of it never worried me. However, after experiencing placement and realising the amount of children that cope with maths anxiety at primary school, I have thought a lot about the way I am going to teach maths and how my personal attitude towards the subject will affect this.

When I saw that “discovering maths” was an elective option for us, I wanted to know more about it. When hearing people in the year above us discussing what it was like, I realised that this was the module choice for me. Although my relationship with maths has not always been the best, I do want to gain a better understanding and appreciation for it as a subject . I truly believe this module will help me become a better practitioner. Having the knowledge and understanding about why maths is so important will hopefully help me in the future when teaching it. I believe another reason for me not enjoying maths in secondary was because I couldn’t understand how it was relevant to my life and I didn’t think I would ever actually use it. Already, in the two weeks that I’ve had of discovering maths, I am beginning to gain a better understanding of why maths is so important and that it really isn’t that scary, and hopefully I will be able to help the children I teach understand this too.