Please see some of our upcoming nursery activities happening next week… 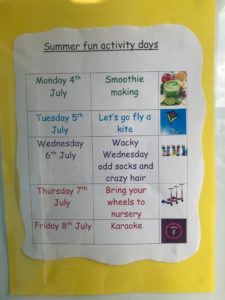 We had lots of apples left over from our lunch so the children had a think about what they could make with them.  They thought it would be a nice idea to make bird feeders with them.  First of all they had to prick the skin of the apples with a fork to make holes to enable them to push pumpkin seeds into the skin of the apples.  Fiona then removed the core from the apples and threaded string through them to enable them to be hung up from the trees to feed the birds. 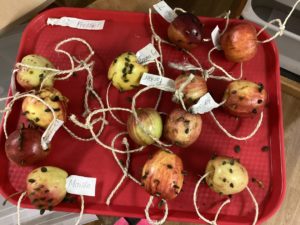 Some of the boys and girls decided to make a book all about the Very Hungry Caterpillar after reading the story and having our very own caterpillars in the Nursery.

The Very Hungry Caterpillar uses predictable text that helped our children to  learn the story very quickly. Count the fruits eaten each day etc.  We were able to use the picture clues to encourage our children to predict what fruit will be eaten next and count them.

The children were learning about the beginning, middle and end of the book.  It enouraged their literacy and maths skills along with their pencil control. 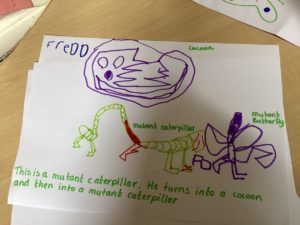 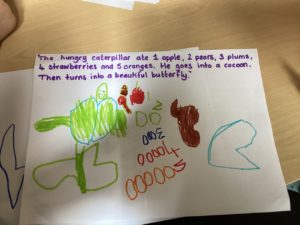 We had special butterfly nets for our caterpillars to live in during their time at Nursery and they hung themselves onto the side of the net when they were chrysalis/cocoon.  Once the butterflies emerged from their cocoon/chrysalis we had to collect flowers and give them water.  We then released them in the orchard beside the wild flowers.

Safely inside the butterfly garden! 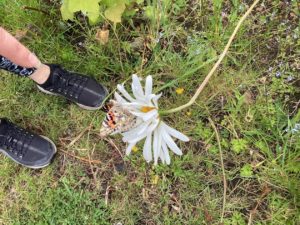 Butterflies being released onto the wild flowers. 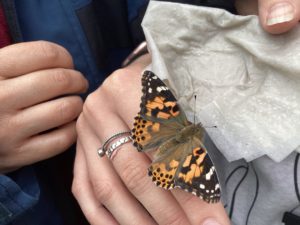 Holding one of the Butterflies before it was released.

We have been enjoying lots of fun out in the garden.  Some of the children have been turning over the soil in our garden beds to get them ready to plant some vegetables.  We have also been growing tomato plants in our polytunnel.

When we were out in the garden the children wanted to do a water experiment.  They used the stands to put the guttering on, poured the water down to find out how fast or slow the moved.  The children would then collect the water at the bottom and do it all over again.  They had lots of fun investigating the speed at which the water moved.

On one of the days when it was raining in the Playground the children used the side of our gazeebo to make a Star Wars Ship. 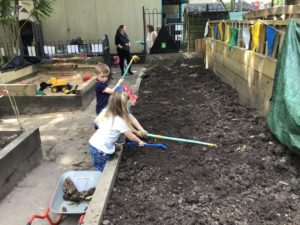 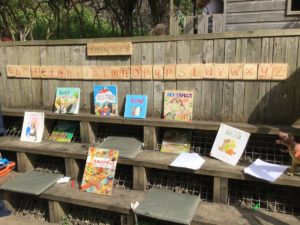 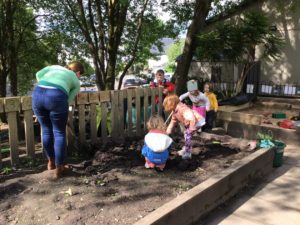 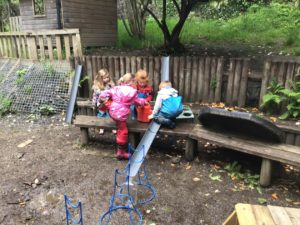 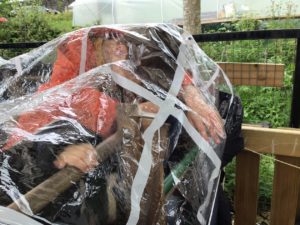 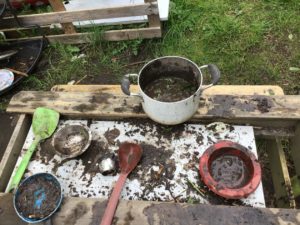 From this activity it would be beneficial for all your children to learn their addresses.

We have an artist in our Team who has been working on a lovely Mural in our playroom.  I think you will all agree the mural looks great.  Fiona spoke to the children and they looked at some books together.  They then chose one of the pictures and asked Fiona if she could paint it on the wall as a Mural for the Nursery. 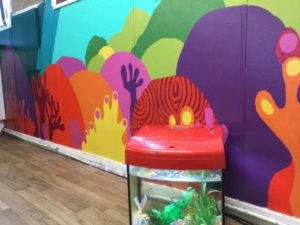 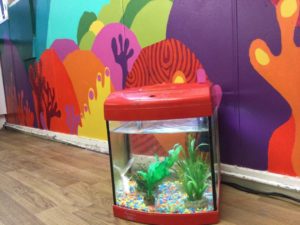 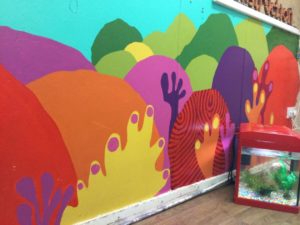 Eileen has been developing our Literacy Area.  This month our Author of the Month is Julia Donaldson and we have been reading lots of books in the Nursery by this Author.  Eileen has created a wall with some of the children’s book reviews of the books they have read along with a selection of  some of the children’s Picture stories on books they have read.  As you can see they have been really enjoying our Julia Donaldson books. 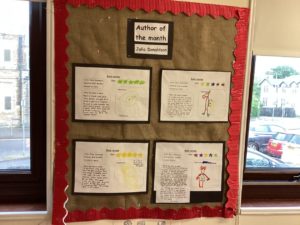 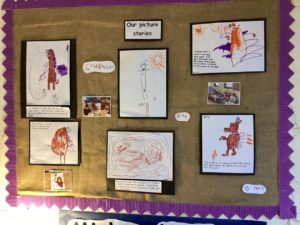 Book Bug is a regular visitor in our Nursery.  We have been developing our early Literacy skills through songs and books with Book Bug which the children have all been really enjoying.  We have had a delivery of the New Book Bug books for the Explorer Bags which will be gifted to all three years and families.  The children are becoming familiar with them in the Nursery and we would encourage you to continue to share the books and activities with them.  We would love to see any pictures of you and your children enjoying the books/activities at home. 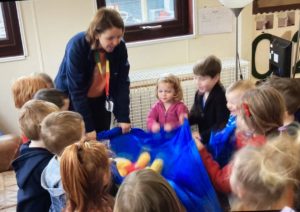 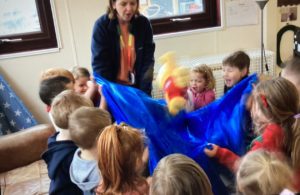 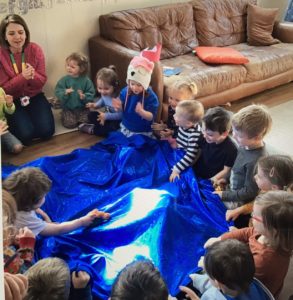 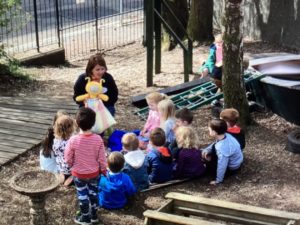 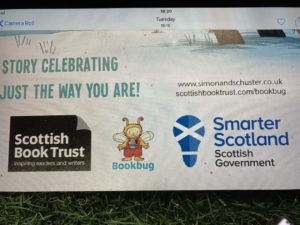 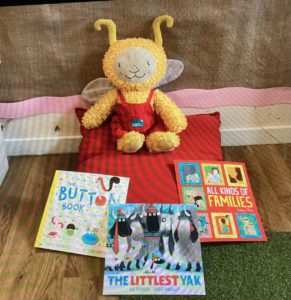 Some of the children have been very busy in our Nursery Garden.  They decided it would be really nice to build a hotel for all our bugs and insects in the garden.  They worked together with Clare making a plan of what they would need for making this, the children then gathered all the items they needed.  I think you will agree that they made a great job of making their very own Bug Hotel for the Nursery Garden and I am sure all the bugs and insects will love it. 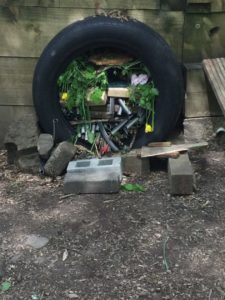 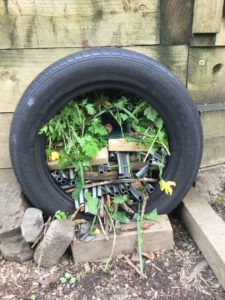 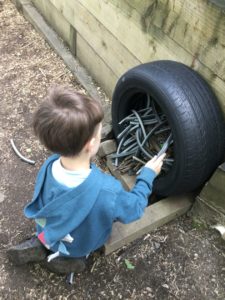 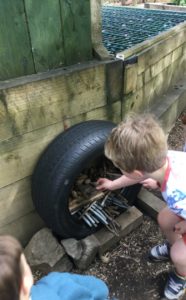 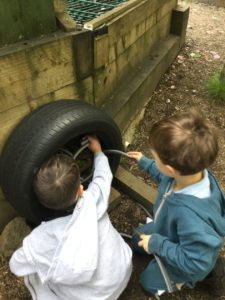