I have learned a lot of digital skills since becoming a MIEExpert in 2016, however I had not had the opportunity to explore Microsoft Teams fully with a class. When we found out that pupils would be learning from home I refreshed my memory of Teams by using the courses on the Microsoft Educator Community. I then took some time to explore using Teams and thought about how I could make it suit the needs of my pupils in a way that was organised and manageable for me.

I have taken an asynchronous approach to teaching and learning since many families have limited access to devices. Every day I post a class information document in the General channel; this includes the date and a visual timetable, using the same visuals that we have in the classroom. In the class information document I post links to the relevant curricular area channels that the children need to access for their learning for the day.

I have found that having a separate channel for each curricular area has helped to keep classwork well organised, benefiting both myself and the pupils. When I post daily work I make an announcement in the relevant curricular area channel with the date and attach the relevant documents. This means that pupils can easily look back in the channel if they have missed any work on a certain day.

Initially pupils were having difficulty with accessing PowerPoints so I have switched to uploading PDFs. This has helped the class to easily access the work on the different devices that they use.

The pupils do not have permission to comment or post in the curricular area channels as I felt like their comments would result in the work I was posting getting lost. I still wanted them to have somewhere to socialise with each other and so set up “things to do when you are bored” and “random chat” channels. The pupils can all post and comment on these channels and it has given them a way to share fun ideas with their peers. The pupils can also post in the “questions about work” channel if they need some support. I have found that having this channel ensures that I do not miss any questions from pupils.

When in school my class use Seesaw to share their learning with their parents/carers. As the pupils and families are familiar with this I decided to carry on using this while schools are closed. Pupils have a home learning code which allows them to post their work directly to me. I can then mark their work and store it in their online journals for each curricular area. Some pupils have opted to post their work to me on Teams and do so using the “submit your work here please” channel. I then transfer their work to Seesaw. Due to the class being used to using Seesaw I have not explored using the assignments feature on Teams, however this is something I would like to use in the future.

Every Wednesday we have a class call on Teams. During this time pupils have time to chat to one another and then we do a class quiz using either Kahoot or Quizziz. When using Kahoot I share my screen in the Teams call so that pupils can see the questions and answer them on their device. If we use Quizziz I share my screen so that the pupils can see the live leader board during the game. The class have really enjoyed these calls as it gives them time to hear the voices of their peers and take part in an activity in a similar way to what we would do in school. It has been lovely to hear their voices and laughter during the calls. I feel like this has helped to maintain positive relationships with the class and helps the pupils to connect with one another during this difficult time.

I have found that organising my class Team in the ways described in this post has helped to keep the Team accessible and organised for everyone using it. After a few initial technical issues in the first week the online classroom has been running smoothly and successfully. If you would like to see examples of the work the class have been producing I have been uploading some of their work on Twitter. 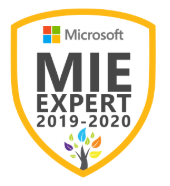